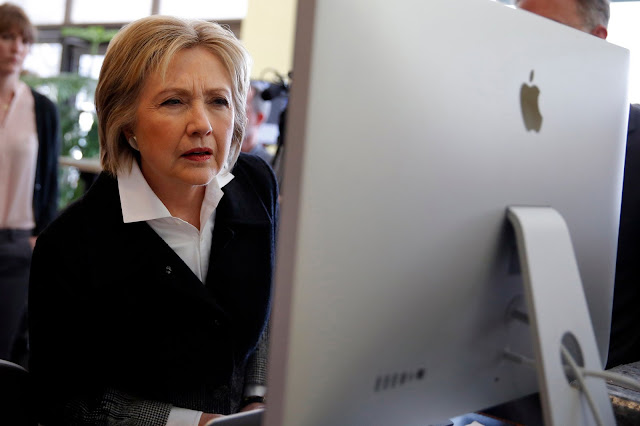 You can leave it to a "liberal" corporate media outlet like Time Magazine to report on something like the launching of David Brock's "Brietbart for the left" organization in an all-too positive way. And that's what Time did. In January, a Time article titled Liberals Plot Revenge As Donald Trump Assumes The Presidency issued some statements about Brock and what he represents which were so appropriately inaccurate that they inadvertently helped me get a firmer grounding in my conviction that Brock and Friends are not advancing a good cause.

Foremost among them, aside from the sketchy classification of Brock as a "liberal" after his aggressive promotion of a highly corporatist and militaristic candidate, was the evident appraisal of the fact that Brock wants revenge through leading what he called a Brietbart for the left. If Brock and other Democratic elites really cared about bringing about a bright future in the face of the Trump regime's rise, they would not be seeking any kind of revenge, let alone trying to emulate the tactics of the infamous alt-right institution Brietbart as a means to do so; they would humbly own up to the role they played in Trump's victory, leave all the grudges and cynicism of 2016 behind, and apply a positive, productive strategy to improving the political situation.

But to Time's strange approval, that's the last course of action which occurred to them in the aftermath of the 2016 election. Not taking a hint from the near-universal rejections Brock is these days being met with from both the Sanders and Clinton wings of the Democratic Party, Brock and his allies, which pretty much just include Hillary Clinton and her top donors and aides, are attempting to continue all the worst aspects of the 2016 Clinton campaign for the long haul. In addition to Brock's "Brietbart for the left" organization itself, which merely employs all the usual cynical partisan hackery, he and the gang are making their in a word deplorable online troll campaign from last year Correct the Record into a permanent operation, having moved all of their now more bitter and motivated than ever employees onto the payroll of Brock's organization Share Blue.


Through this platform provided by Brock, Share Blue's rank-and-file members to this day carry on the proud traditions set down by Correct the Record, setting up numerous fake accounts that typically consist of safely anonymous profile pictures which frequently descend upon unsuspecting opponents of the Democratic establishment to spread propaganda and/or simply stir up confusion, negativity and conflicts.

"In addition to profile pictures depicting Brazilian soccer fans, they use the old HRC primary slimes against Bernie over and over again," reports Amy Sterlin Cacil on the practices of Brock's new troll army. "So, why are these people being paid to do these things? It runs counter to any marketing or community-building advice imaginable. The answer is clear. They don’t want people to communicate. They want people to be isolated, fearful, or simply disgusted with social media and politics, in the exact same manner as an abusive partner wants to isolate, demoralize and control the person they falsely say they love."

It was at this point in the writing of the original version of this article that I composed a rant against the perpetrators of this operation whose unhinged nature was altogether unnecessary and that I decided to delete after taking it up with the first person I showed it to that wasn't as angry as I am at these adult bullies. (Caitlin Johnstone recently experienced something similar, having half-jokingly titled her latest article on the Brock team's tactics ShareBlue Is Now Saying That 'Bernie Bros' Were Actually Paid Russian Trolls. Hold Me Back.) But after sufficiently venting my outrage at the shameful behavior of Brock and Friends (an outrage which Johnstone has reportedly managed to express with "a strange, guttural sound somewhere between a trumpet full of water and a goat getting kicked in the balls"), I've come to the conclusion that to get so worked up about the Brock trolls in the first place is to perfectly play into their hands.

Let's zoom our focus way beyond the unpleasant minutiae so far mentioned and look at what's been lately happening to the actual political system: in at least a hundred small ways, it's seemed, Bernie Sanders' political revolution has won victories since the election. And the fact that these small gains have happened at least once every week for the last five months or so is starting to show on a big scale. Between the many, many elections of Berniecrats to positions in local Democratic parties that have been occurring since Bernie's movement kicked into gear, as I illustrated in my last article, they've pretty much taken over three state Democratic parties in the first three months of this year. The Green Party is making gains as well, with Green congressional candidate Kenneth Mejia having recently gotten more votes than his Republican competitor, making the Greens the new second largest party in Los Angeles.

And the fact that both the Democratic Party reform and third party approaches are extremely difficult to succeed in presents a relatively minor setback to the political revolution. As the increasing economic inequality-provoked societal trend towards revolt against traditional institutions and leaders culminates with the white working class' recent souring of their false messiah Donald Trump, an awakening is taking place that's already started to force change within the political system. Republicans, who have already joined the majority of other Americans in mostly supporting climate action and higher taxes on the 1%, are now stepping on board the push for universal health care as well according to a recent poll that says more Republicans support single payer health care than not.

This emerging consensus among the American people that neoliberalism needs to be counteracted has already made the passage of Berniecare into a near-term prospect, and as I've illustrated, the recent rise of single payer health care is just the first of the supposedly radical ideas we'll see enacted in the months and years to come.

In short, a paradigm shift is taking place. And yet for the past year, the benefactors of the old order have been working quite literally round the clock to trip the potential creators of this shift up in the most petty and psychologically damaging ways possible. I, like pretty much every other Berner, have encountered and admittedly been affected by the online foot soldiers in Brock's sadistic project. I've more than occasionally come across the purposefully offensive and confrontational rantings of the Democratic establishment's social media shills, complete with the still running attack lines against Sanders supporters and the ironic accusations of people like me being secret paid Putin trolls. And they've also more than occasionally gotten under my skin as their composers intend. But no matter how much the Brock trolls have gone on the attack, they haven't prevented me from getting off the social media threads that they like to hijack and doing the work needed to make the political revolution successful.

And the fact that trolls have such a limited ability to waste the time of their target audience is what's resulted in so many other members of the political revolution having lately gotten to work as well. The establishment's direct online trolling efforts are, in a word, failing, along with its more subtle recent effort to discourage the revolutionaries by trolling them with bizarre assertions from the corporate media about them having been mislead into opposing Clinton by Russian trolls posing as Sanders supporters. None of this is stopping us from donating to the various burgeoning Sandersist organizations, contacting our should-be representatives about things like single payer health care, and in most cases successfully seeking elected office. If anything, it's making us more active, with me and virtually every other Berniecrat being motivated to fight back against the cause of the Brock trolls whenever we see them issuing their smug statements about us being destined to fail.

As the insurgents mobilize, the oligarchy is desperate to mount an effective counter-campaign, and because it knows it can't ever put together a grassroots operation, it's invested in fighting its opponents with deceptive and (it hopes) revolutionary behavior-discouraging statements made from online comment sections and Washington Post editorial pages. But revolutionaries are made of sterner stuff than any snide paragraph can overcome-we've signed up to combat the most powerful forces in the world, after all-and the trolling isn't getting to me or pretty much anyone else. And if you feel like it's getting to you, take my example; you, not the trolls, and certainly not the pro-establishment "liberal" article writers, have all the power over what attitude you have and which actions you take.

I'll conclude by quoting this message to Brock and Friends, as put out on March 31 by one of the political revolution's rank-and-file members Don Ford:

I'm sorry that my plan to take over the Democratic Party by maintaining our work in the primary into the party organizations is working...

I'm sorry we took over a county party today that makes up 2/3s of Oregon.

I'm sorry [the] New Mexico takeover was so effective it hit the news.

I'm sorry to all the internet trolls who got paid to stop us but were ineffective. I'm sorry that you spent millions and we did it on pennies.

I'm sorry because it has to be crushing to find out that whatever plan you are working on isn't as effective [as you thought it would be].

I'm sorry that people were out of the loop and missed the first wave of information not given out on Facebook. We all only have so much time.

As we continue to sweep hand counted paper ballot elections across the country it has to be crippling to find out we did it without your help.

It's not too late, and never will be. In the end, the work we are doing is for everyone whether you want it or not.

I just hope you can recognize the success and enjoy the fruit it bears.

The Revolution is a leaderless swarm coursing through the veins of all 57 states and territories...

Our victory is only a matter of time and staying the course.

Remember, they only win if we surrender.