How To Tell When An Oligarchy Is Scared For Its Life 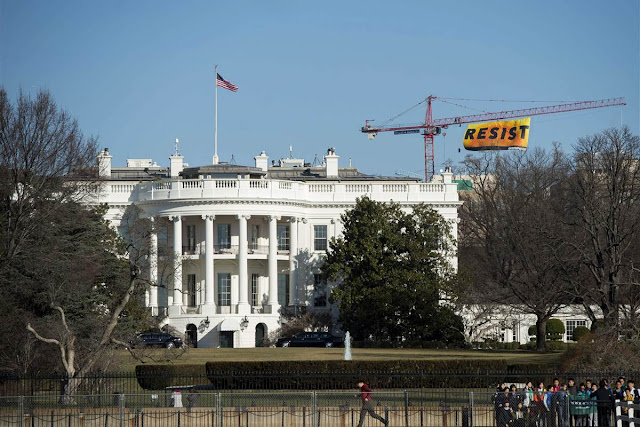 It's somewhat fashionable these days for a political writer to conjur up a dystopian vision of what things will be like by the end of Donald Trump's first term, so here goes: it's the day after Election Day in 2020, and the president has just been re-elected. If you can call it an election. The results of this contest, as they were with that of 2016, have been fraught with examples of voter suppression and statistically impossible exit poll discrepancies. And the means Trump used to gain support this time around have been similarly sketchy.

In the aftermath of the great economic unraveling of the first half of 2017, the president's approval ratings, along with the public support for the political and economic system he represented, looked like it would never recover from their staggering dip. But then, of course, the United States was attacked by terrorists in an epic breech of national security. Following the tragedy, Trump's poll numbers rose astronomically, along with his tendency towards engaging in corrupt and authoritarian behavior. He (by which I mainly mean the far smarter and scarier people who control him) went on a terrifying rampage, suspending virtually all constitutional liberties, eliminating the few remaining protections set in place to protect the bottom 99% of the population, and ultimately creating the now undeniable climate catastrophe we're experiencing today, all with the blessing of his unwilling-to-fight "opponents" in the Democratic Party establishment.

And when this inevitably started to bring Trump's poll numbers back down, he fulfilled the plan he'd once hinted at of starting a new War in Iraq to "take their oil." All of this, along with the massive efforts made by the Trump administration to take away the voting rights of nonwhites, caused Republicans to continue their eight-year streak of increased domination over electoral politics, with the GOP having retained the House and the Senate in 2018 and "won" the White House by a large margin in 2020. Meanwhile, the economy has become more unfairly ordered than ever, with the bottom 99% being mostly very poor while those at the very top enjoy as much wealth as ever due to the trillions of dollars they were awarded in bailout money after the 2017 economic crash.

As the recent behavior of Trump and Friends indicates, though, they expect a very different future. When one looks closely enough at how the benefactors of the political and economic status quo act these days, it becomes clear that they're trying to mask a deep, sometimes subconscious sense that the system they've created is in its death throes.

It can't be a coincidence that right after the existence of the neoliberal Democratic establishment came into peril with the rise of Bernie Sanders and his army of change-hungry activists, Democratic elites took wildly extreme measures to try to hold their crumbling base of support together, having started a clearly McCarthyite campaign and blamed everyone but themselves for their November defeat.

It's impossible not to at least speculate that Trump and his fellow oligarchs have grown very worried about their beloved neoliberal system being overthrown when, after a series of notably popular movements to take society back from corporate domination emerged in the form of Occupy, the Bernie Sanders campaign, and others, they filled their new government with former corporate executives, planned for the creation of an unprecedented police state, and threw out baseless claims about terrorist attacks to keep the public in a state of useful fear.

It's blatantly clear that those in power have largely become aware that their empire is close to crumbling when many members of the billionaire class have started seriously preparing in recent years for a coming crackup of civilization as we know it, often one which involves an uprising among the lower classes.

That last example is different from the first two, as it reveals certain members of the oligarchy have already surrendered themselves to the fact that their system is certain to fail, but for the most part, it seems, the world's elites are reacting to the growing signs that business as usual can't continue by doubling down on their faith in it. Through the launching of increasingly absurd propaganda campaigns, the prepared assembly of autocratic states, and the wholesale takeover of the government by big business, elites are attempting with redoubled vigor to take more control so that when the uprising inevitably comes, they'll be better suited to counter it.

And they have good reason to expect this challenge. In the 1930's, the last time economic inequality in America was as extreme as it is now, those left behind by an exploitation-based economic paradigm made every effort to break the power of corporations and the super-rich, and they very much succeeded. The 21st century's movement for economic justice (and by extension environmental, social, and geopolitical justice) are quickly moving in for the kill as the ever widening wealth gap forces public sentiment to become more and more favorable towards their agenda. And when this populist energy hits critical mass around the year 2020, a likely nonviolent but highly disruptive and polarizing battle between the masses and the oligarchy will be under way.

Which of these two will prevail, though, and get to define the next phase of history? I'll take my best guess in another hypothetical scenario: It's the day after the election in 2020, and President Trump has just been defeated in a staggering landslide by a non-corporate funded opponent who may or may not be an 80-year-old but still fighting Bernie Sanders. This candidate's long path to victory has been tied in with the enormous gains that their supporters have made throughout these last four years.

Those gains started with the enormous movement ignited right after the 2016 election by Bernie Sanders and his supporters to remake the Democratic Party and the nation in their image. And they very much began to do so in 2017, having earned major victories in California and other states while generally making establishment Democrats uncomfortable. Their efforts picked up a lot of additional support from former Trump supporters and pro-establishment liberals when you-know-what happened to the economy in 2017.

And while things got frightening for those who professed their agenda in the aftermath of that year's terrorist attack, it proved to be a temporary setback. Many of them carried right on with their activism work away from the government's newly dissent-hostile gaze, giving them a wide series of victories in the local elections of November 2017. And as time went on, their fortunes for the most part improved, with Trump's approval ratings falling back to below 50% fairly quickly and many of those who'd thrown their support behind the administration amid the nationalistic fervor of the 2017 terrorist attacks' immediate aftermath moving back into the movement of the Berniecrats. This surprising resilience of anti-Trump and anti-neoliberal sentiments, which was no doubt due to the economic factors of the time, for the most part continued throughout the War in Iraq that the Trump administration launched to provoke renewed compliance from the public.

And the rest is an unsurprisingly uplifting story. Through relentless involvement in electoral politics, Sandersists took the majority in the Senate and the House in 2018 (they won the latter in spite of Republican gerrymandering thanks to Brand New Congress' brilliant strategy of running some candidates on the Republican ticket). Through intense public pressure, they provoked a widespread effort among local, state, and sometimes even national government officials to pursue creating a living wage for all, universal health care, and other necessary measures. And most fortunately, through a great deal of bottom-up climate action on their part, they were able to take advantage of a narrowing window of opportunity for averting climate meltdown.

As a result, the Trump administration became politically tied down in spite of its best (and most maniacal) efforts, poverty began to drop fairly rapidly, and things generally became less uncertain and more hopeful. This has been especially the case throughout the 2020 election cycle, wherein the overwhelming surge of progressively populist energy that elected Trump's successor has correlated with the emergence of a new and more resilient version of Occupy Wall Street. And while the president-elect faced some obstacles when overzealous pro-establishment Democratic primary election officials in several states perpetrated voter suppression and electoral fraud, the Democratic Party's state and local leadership has been taken over by Berniecrats so much throughout these last four years that the rigging of the 2020 Democratic primaries wasn't half as extensive as the rigging of the 2016 Democratic primaries. So like so many other recent efforts from the Sandersists, their presidential insurgency prevailed.

Which of these futures do you think is most likely? Yeah, that's what I thought.
Posted by Rainer Shea at 11:56 AM