If We Want The Resistance To Succeed, We Won't Let It Be Hijacked By The Neoliberals 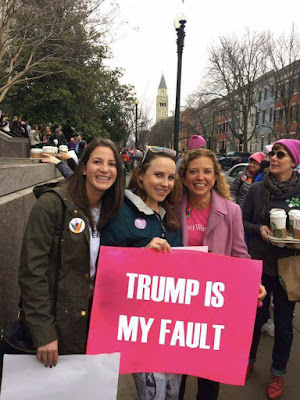 The words on the sign above are of course fake. But the message it articulates is very real. Debbie Wasserman Schultz and the other corporatist members of the DNC, in addition to having engaged in the infamous tactics to undermine Bernie Sanders' campaign that we learned about from Wikileaks, naturally did nothing to stop the numerous incidents of voter suppression and electoral fraud which were perpetrated throughout the primaries by lower-ranking Democratic officials.

This subtle coup against the Democratic candidate who was supported by the majority of their party's electorate, along with the terrible strategies used by the Clinton campaign to win over that majority, is one of the many actions establishment Democrats have taken which played a major part in Donald Trump's election. While you'll never see them admit it, the vast majority of the American people do not share the corporatist, morally relativistic worldviews of establishment Democrats, and this made them the worst ones possible to be in charge of stopping Trump from winning.

So after the election, these Democrats took the only wise course of action: try to fashion themselves as the leaders of the resistance movement to Trump.

While the fiasco of the Democrats' 2016 defeat has convinced some of those who supported Clinton in the primaries that they've been pursuing a dead-end political brand, most of them still aren't willing to acknowledge the deep problems with the current Democratic Party, as evidenced by how all the corporate Democrats who might run in 2020 have the combined support of 45% of the Democratic electorate. And once again, the minority within a minority of the "liberal" oligarchs who fund and organize the charade of the Democratic Party establishment are trying to make claim to the role of opposing Trump and the GOP so as to further their ulterior motive of maintaining the economic and political status quo.

Their attempts to hijack the anti-Trump movement are predictable and occasionally amusing. One of the neoliberal Democrats' media gofers Keith Olbermann has dramatically photographed himself with a concerned expression while draped in an American flag, with the sleek logo of "the resistance" featured in front of him; the neoliberal Democratic mega-donor George Soros has had disturbingly significant involvement with the organization of the Womens' Marches; and establishment Democrats have generally been shamelessly eager to use policies like Trump's Muslim ban to point the finger at progressives who didn't back Hillary Clinton-and that's including those who didn't support her in the primaries.

And once again, the neoliberal Democrats' campaign to make their left-wing opponents compliant by branding themselves as noble allies in the fight against the greater evil is endangering our chances to actually defeat the greater evil. As I've illustrated in depth by pointing to the public opinion polls which show the vast majority of Americans support Sandersism's supposedly radical goals and the inscrutably populist nature of Trump's victory over Clinton in the Rust Belt states, appealing to the left, not the "mainstream" center, is in most cases the best way to win elections these days. And the old guard Democrats' refusal to acknowledge this is already hurting the Democrats' hopes for fighting Trumpism on the electoral level.

"We may very well have one chance to save our party and begin winning elections again," assessed the decidedly Berniecratic Santa Rosa Democratic leader Sarah Coutu in a letter to The Progressive Army regarding the tactics that pro-establishment Florida Democratic officials used last month to shut out reformers in their state. "Florida plays a huge roll in nationwide elections. The Florida Democratic Party had this one chance to recover from the huge losses on November 8th and prove that they were serious about change. I personally feel they have instead sealed our fate to another 8 years of losing elections. Today feels like the beginning of what others are calling 'Trump’s World'. Before today [when the neoliberals took ill-earned victory in the race for the Florida Democratic Party's next leader], there was hope we could start winning elections in 2018 and thereafter, bringing the party back to the people, uniting our forces across the entire party to stand strong against the republicans. I’m afraid we have just opened the door for Trump to do catastrophic damage to our country, with no force to stand against anything he wishes to do."

These so-called resistance leaders aren't putting up much of a real fight to Trump and Friends on the civic level, either. Far too many Senate Democrats have voted to confirm Trump's cabinet nominees, something that I think will prove to be just the beginning of a saga of over-compromises that corporate Democrats, in their eagerness to be "pragmatic" and generally not rock the boat, will make towards the Trump administration. After all, these types of Democrats have no real incentive to block Trump's agenda of increasing racial inequality, perpetuating unnecessary military conflict, escalating the class war on the bottom 99.9%, ending civil liberties, and further making the American pretense of democracy irrelevant, as they themselves for the most part represent all of these goals.

This folly on their part, I expect, will soon become a danger not just to progressive values but to our very republic, as Trump is sure to take on a truly fascist bent when the next major terrorist attack inevitably occurs.

Those who don't represent these things, thankfully, are doing everything they can not to let this movement whose prospects for success are our only hope of saving the planet from ecological meltdown be co-opted and neutered by such narrow and self-serving interests. The Berniecrats have already made great gains in wresting the California Democratic Party from the neoliberals, as well as in many smaller facets of the Democratic Party throughout the country. And while the old guard has managed to occasionally strike back as mentioned three paragraphs above, their only line of defense is evidently an ability to rig the process in their favor which seems to only reach so far. They may be able to set some political booby traps for the progressive insurgency, but stealing every election is all but impossible for them to do. And so the Sandersists, with their unparalleled nationwide network of grassroots activists, are by far in a better position than the establishment is to win elections both within and outside of the Democratic ticket, as well as to influence the actions of those in power generally.

In November, James Howard Kunstler wrote regarding the 2016 election: "Daddy’s in the house and he busted straight into the nursery and now the little ones are squalling in horror. Mommy was discovered to be a grifting old jade who ran the household into a slum and she’s been turned out to solemnly await the judgment of the courts, nowhere to run, nowhere to hide. The kids on campus have gone temporarily insane over this domestic situation and some wonder if they’ll ever get over it." Well, since then the kids have for the most part managed to regain sanity and start directing their panicked energy towards getting mommy out of the house, who's refused to obey her eviction notice. And when they finally get her out of the picture, they can focus on getting daddy, who's not as strong as he looks, tied down to the nursery floor. Then it's playtime.
Posted by Rainer Shea at 12:00 PM