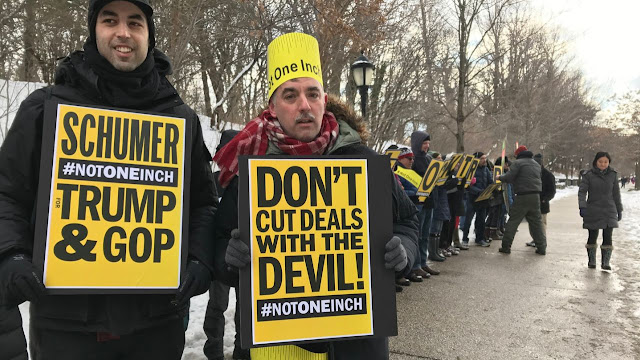 It's an old stereotype that Democrats never put up as big a fight as their opponents typically do. And it's mostly accurate. Ronald Reagan was able to pass all of his tax cuts and deregulations through a Democratic Congress; Bill Clinton gave into the wishes of Republicans on many occasions; Barack Obama displayed a similar folly of caving into his political opponents all too much; and everyone remembers the tragic consequences of how most House and Senate Democrats voted for the Iraq War.

So it's no surprise that a month after I predicted most top Democrats wouldn't stand up to Donald Trump, my ability to do political forecasts has been vindicated (to mixed feelings on my part). Since then, an unacceptable amount of Senate Democrats (including the Senate Minority Leader Chuck Schumer) have voted to confirm Trump's cabinet nominees. Among these bipartisan-endorsed leaders are Mike Pompeo, who wants to expand America's surveillance state into a database for the financial information and "lifestyle" details of U.S. citizens as well as bring back torture, as well as an array of other such extreme and/or unqualified individuals.

Why are these Democrats acting so submissively towards Trump? It likely has to do with the fact that despite all their obligatory condemnations of him, their agenda isn't very different from his.

Let's get beyond all the tough rhetoric Democrats like these have obligatorily directed towards Trump and take a good look at how they actually compare to him: first off, they're for the most part both tied in with Wall Street and corporate interests. Whereas Trump has completed the government takeover Goldman Sachs has long been inching towards by putting a great deal of executives from the bank in his cabinet, Chuck Schumer, like many other Democrats, takes massive amounts of campaign contributions from Goldman Sachs and the other major financial institutions. Whereas Trump and his cabinet display vast inclinations towards increased U.S. militarism, the president that Democrats like Schumer have so unwaveringly backed for the last eight years more or less continued the hawkishness of the Bush administration. Whereas Trump and certain members of his cabinet, as has been established, want to expand on Bush and Obama's surveillance state and bring back torture, Chuck Schumer for one has endorsed both of these things.

The list goes on and on of the grotesque similarities between the Democratic and Republican parties, and thus between establishment Democrats and the Trump administration. Both parties are owned by Wall Street and large corporations, both parties hurt nonwhites through mass incarceration, the War on Drugs, and the advancement of economic inequality, both parties serve the oil companies and weapons contractors which benefit from a bloated and over-used American military, and both parties benefit from America's compromised electoral system. So it's no surprise that they tend to work together so often.

But make no mistake, this is not about those things; this is about corporate Democrats finding a sneaky way to blatantly (but not openly) bring about their true, center-right agenda. It's no coincidence that in every instance, it's been the more moderate Democrats that have gone along with Republican goals while those on the left have been the ones staunchly opposing them. Rarely, if ever, have we seen one of the neoliberal "progressives" refusing to budge when Republicans call for policies which drive up the wealth gap, destabilize the middle east, and assault civil liberties. It was Bernie Sanders, not Hillary Clinton, who has always opposed the Iraq War, Bush's Wall Street bailout, and measures like the Patriot Act and "enhanced interrogation." And it's the Sandersist wing of the Democratic Party, not the Clintonist one, which can be relied upon to protect the country from Trump's agenda.

Sarah Jones argued similarly last week in her piece The Case Against Unity:


It's not enough for Democrats to call themselves The Resistance. They must also explain what it is they're resisting. Is it simply Trump? Or is it the ideology that helped put Trump in power?

Here, Democrats should take a lesson from the left. "Movements can mobilize people to refuse, to disobey, in effect to strike," Frances Fox Piven recently wrote in The Nation. "[P]eople in motion, in movements, can throw sand in the gears of the institutions that depend on their cooperation." Fight for 15, Occupy, Black Lives Matter: They point the way forward. So, too, did last Saturday's Women’s March. In each instance, people rallied around a cause, not a person or a party. They did not turn out for politicians, they were not attracted by celebrities. They turned out because they wished to identify themselves with a specific values statement. Their actions teach us what it means to do politics—and warn us against defining politics in electoral terms alone.

The Democratic Party will continue to fail unless it understands this. The victims of its failure won't be Hillary Clinton or David Brock but vulnerable Americans whose survival depends on the party's ability to oppose Trumpism. Its left-wing critics have no choice but to reject its calls for unity. The stakes are too high to do anything else.

In other words, whenever establishment Democrats call for an end to the infighting within the left so that we can unite against Trump, they're essentially calling for unification behind the Trump government itself. In terms of both electoral and non-electoral politics, it's become clear, Sandersism represents the best chance Democrats have to defeat Trumpism.
Posted by Rainer Shea at 11:21 PM