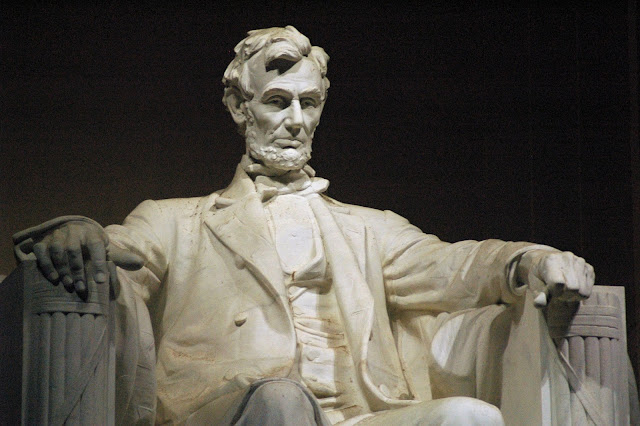 No, I [Abraham Lincoln] was not a 3rd party candidate in 1860. Learn some history, dammit.

Or so the condescending internet meme goes. In response to the claim from electoral reform advocates that Republicans were a third party when Lincoln was elected, supporters of the traditional political model have said the real history isn't that simple; Republicans had established mainstream support and won many seats in the House and the Senate before 1860, say the skeptics, proving that the Greens and Liberitarians should give up and let the serious people keep running things.

This argument actually proves the opposite.

It's true that Lincoln's campaign was not an insurgency. Had he run in a party that had little support or positions in other branches of government than the presidency beforehand, he would have most likely lost. As has been the case with all other third party presidential efforts since then, the political system did not change overnight. But its rise took place during a period of time that, when compared to the rest of American history, is impressively brief. And that directly parallels how the rise of another third party in the 21st century will play out.

Even then, America was locked into a two-party system. Starting with the 1828 election, wherein Andrew Jackson defeated National Republican John Q. Adams, Democrats and Whigs dominated virtually all of politics. But as the Abolitionist movement started to make serious progress during the 1850's, and neither party was willing to change their position on slavery, their futures became in doubt.

The Whigs, of course, were the ones who took the fall; after the Republican Party was founded on February 28, 1854, they filled a political vacuum of anti-slavery Whigs who decided to split with their party and helped Republicans replace it as the main opponent of Democrats during that year's midterm elections. Pro-slavery Whigs, having seen their party destroyed in only a matter of months, then realigned with the Democratic Party, which still shared their views. In 1856, Republicans staged a losing but successful presidential campaign by American military officer John Fremont, and solidified their majority over the remaining Whigs in the House and the Senate. By 1860, they had overtaken the Democrats in all three departments.

As someone who has seriously considered the future of American politics given recent events, this story sounds strikingly similar to what I expect will happen in the following years.

And I'm not the only one who might think along the same lines. In March, Robert Reich-who has had firsthand experience with the appalling neoliberalism of the modern Democratic Party as Bill Clinton's Secretary of Labor-wrote a piece that predicted what would happen to American politics if Bernie Sanders did not become the Democratic nominee. He reasons that regardless of whether a Democrat or Republican is the next president, the Trans-Pacific Partnership will be passed, another recession will occur that prompts Wall Street bailouts, and the wealth gap will grow even bigger.

But then, omitting a lot of the details that would be sorted out later, he says that because politics "abhors a vacuum," in 2019 there will be a sudden surge of support for a populist alternative to the Democrats that he hypothetically calls the People's Party. "Americans rallied to the cause," he recounts from the future about the party's success. "Millions who called themselves conservatives and Tea Partiers joined with millions who called themselves liberals and progressives against a political establishment that had shown itself incapable of hearing what they had been demanding for years."

And finally in 2020, he says, the People's Party wins a majority in both houses of congress along with the presidency.

Political vacuums. Dissatisfaction with the parties. Major shifts of support in a short period of time. The future that Reich and I believe is more than likely and the events that created the GOP are foreboding in their parallels. And while it's impossible to say exactly how this scenario will play out, the Republican's rapid ascension proves that when voters are highly concerned with a certain issue, in that case slavery, they gravitate towards the leaders who will address it.

With the rise of the People's Party-or whatever other form it takes-there will be a number of issues that contribute to the electoral realignment. Ending the wars, softening the effects of climate change, and other important problems will of course play a part, but as Reich describes, more than anything it will be the massive economic inequality which is certain to increase in the next four years that unites Americans against the two corporate parties. Though Democrats and Republicans have enjoyed the support of most Americans for several decades despite not representing their interests, too much concentration of the economy is bound to lead to a populist uprising eventually, and these next few years will be when that point is finally reached.

What will politics look like after history repeats itself? I think the most likely scenario is that the Democrats will go the way of the Whigs, replaced by an alternative that suites the interests of their base. The Republicans might survive in the form of Trump-style reactionary populism they've taken on this year, but they won't be the dominant party.

The party that the GOP's founders created has become sadly unrecognizable from what they intended. But the methods that they used to make it come to power haven't changed, and they'll soon be put to very good use.
Posted by Rainer Shea at 5:30 PM