Make No Mistake, The Democratic Party Is Dangerous 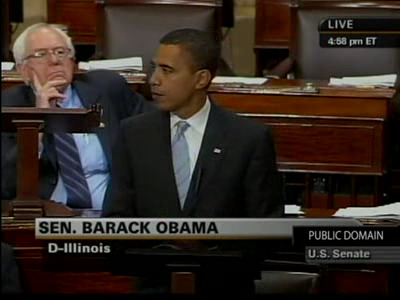 It was October 1, 2008, and the senate vote on whether banking oligarchs would be allowed to further dominate the economy  and eventually crash it again was being discussed. The problem was that the measure had the name "Emergency Economic Stabilization Act," which most in the House and the Senate were taking at face value. Among the supporters of the act were the majority of Democratic officials, including Barack Obama.

Obama made a seemingly solid case for the bailout when his time to speak came, explaining how he was satisfied with the terms that the administration had agreed to about making the banks pay back the appropriate amount of money to taxpayers. But as Senator Bernie Sanders sat behind him, he remained unmoved in his opposition to the measure, and he delivered an indisputable argument against the notion that it would help the interests of the people.

But most of the Democrats refused to listen, and two days later, the bailout was passed. As a result, the big financial institutions have become so large that they're no longer possible to sufficiently regulate, the five biggest banks control $15 trillion in assets according to the latest estimation (to put that in perspective, all of the wealth in the U.S. is $10.5 trillion), and the events that led up to the 2008 financial crisis have been repeated, this time with even worse consequences expected. And all because those Democrats in the House and the Senate gave in to the wishes of their donors in the banking industry.

In an infamous Democracy Now interview, Noam Chomsky once offered a scathing assessment of the Republican Party:


We should recognize—if we were honest, we would say something that sounds utterly shocking and no doubt will be taken out of context and lead to hysteria on the part of the usual suspects, but the fact of the matter is that today’s Republican Party qualify as candidates for the most dangerous organization in human history. Literally. Just take their position on the two major issues that face us: climate change, nuclear war. On climate change, it’s not even debatable. They’re saying, “Let’s race to the precipice. Let’s make sure that our grandchildren have the worst possible life.” On nuclear war, they’re calling for increased militarization. It’s already way too high, more than half the discretionary budget. “Let’s shoot it up.” They cut back other resources by cutting back taxes on the rich, so there’s nothing left. There’s been nothing this—literally, this dangerous, if you think about it, to the species, really, ever. We should face that.

And he's right. Though the mission of the Republican Party is to maximize the profits of banks and corporations, not intentionally exterminate an entire race as the Nazis wanted to do, because the logical extension of the Republicans' goal comes with ignoring the potential destruction of the planet, they are the group with the ability to do even more serious damage.

But as Chomsky would also agree, Democrats are not far behind. He said in another instance that


There used to be a quip that the United States was a one-party state with a business party that had two factions: the Democrats and Republicans—and that used to be pretty accurate, but it’s not anymore. The U.S. is still a two-party state, but there’s only one faction, and it’s not Democrats, it’s moderate Republicans. Today’s Democrats have shifted to the right.

As with the GOP, the threat that the modern Democratic Party's ideology poses is not that it explicitly promotes violence, human suffering, and environmental harm, but that it consists of a series of rationalizations which keep those enamored with it from recognizing that they're supporting these things.

The list goes on and on. But what seems to occur in every one of the Democratic excuses for participating in a version of Republicanism is pragmatism. It isn't selling out when a Democratic politician accepts campaign contributions from the very same corporations and banks that Republicans do, refuses to stop a war, or pushes for a neoliberal trade deal; it's working within the system. "We all believe in economic opportunity for everybody," Delaware Democratic Governor Jack Merkel once said. "The difference between myself and senator Sanders and senator Warren is that they think that's not happening because the system is rigged, and I think it's not happening because the system is changing."

The problem with Merkel's Democratic worldview is that instead of recognizing the fundamental problems within our government and economy so that they can be addressed with the urgency and aggressiveness needed to solve them, it always encourages caution and negotiation as the best approaches. While such an incremental method is indeed necessary in some cases, to assume it's an inherently good governing approach is anything but rational.

Surrendering to the vastly powerful forces of neoliberalism whenever possible and then calling it incrementalism-which, overall, is a decent summary of what the Democrats have done-is, in a way, more dangerous than the open regressiveness of the Republicans. The only result of accepting this political philosophy, as we've seen this year, is that the Democratic Party becomes ever more militaristic, oriented towards the interests of big business, and even less progressive on social issues. And if this trend continues, the next step will be an official merging between the two parties on those crucial issues that Chomsky mentioned. They will both put the profits of fossil fuel companies above the stability of the climate. They will both be solely focused on redistributing wealth to the top. And they will both want to instigate and escalate military conflicts, perhaps even to their logical conclusion of nuclear war.

Because as governor Merkel implies, if the system changes, you need to change with it.

The good news is that the party will be out of power before it has the chance to enact such an agenda. In April, when faced with the question of whether Democrats have a future when so many young people and liberals are growing deeply dissatisfied with the direction their party has taken, DNC chair Debbie Wasserman Schultz replied,


Look, I mean, I think both political parties, through time immemorial, have had a spectrum, a range of views across a spectrum, but we're a big tent party, so we have the ability to absorb and be unified with people on the far left and on the center right, and have the same people call themselves Democrats.

She's doing nothing but echoing the outdated Democratic model of political triangulation from the 1990's. This is not the same country as it was the last time the Clintons took over the Democratic party; public opinion has turned very far to the left. Income inequality has reached an unprecedented point in American history. In the last eight years, Democratic membership has gone down by at least 6%, and the number of independents has gone up by at least 14%. The writer Seth Abramson describes this radical shift in the American political landscape as Clintonism having been defeated by Sandersism, a worldview which he says consists of this:


In Sandersism you negotiate with any and all parties of good faith up until the moment doing so requires sacrificing a principle. If, under those conditions, not enough parties of good faith remain, you spend all your time and resources writing executive orders and working for an end to gerrymandering and the defeat of all bad-faith politicians in local, state, and national primaries and generals. In Sandersism politics is an arena where ideas, not bank accounts or special interests, are contested; every American is given every possible opportunity to vote; corporate practices that maim or kill living humans are outlawed; those few economic practices that can terminally endanger basic economic justice are adequately regulated; and we spend as much money making sure our criminal justice system and law enforcement apparatuses are actually just as we do ensuring our military is capable and appropriately fearsome. Sandersism is a “we” and an “us” movement that transcends the artificial divisions of the party era and the atomization of persons and communities. A Sandersist spends the minimum amount of time running for office and the maximum amount of time doing the difficult work of governing — and in both roles places transparency ahead of political exigency ten times out of ten.

The Democratic Party as it has existed for several decades and will, in all likelihood, continue to exist in the years to come, in no way fits this model. And as Sandersism looms increasingly large in the court of public opinion, the party will die out and be replaced by something else.

In the meantime, though, we'll be forced to reckon with the consequences of our Clintonian past. Because of that bailout bill, another recession is coming, this one possibly even bigger than the last one. And when that crash hits, Obama and the other establishment Democrats will go right along with the Republicans on bailing out the now even more concentrated banks.

Whether they succeed again is uncertain. But this time, when Bernie Sanders is watching Obama push for another policy that so shamefully represents the Democrats, he'll know that the party's time is about to run out.
Posted by Rainer Shea at 7:22 PM