The Only Ideology That Can Defeat Trumpism, According To Math 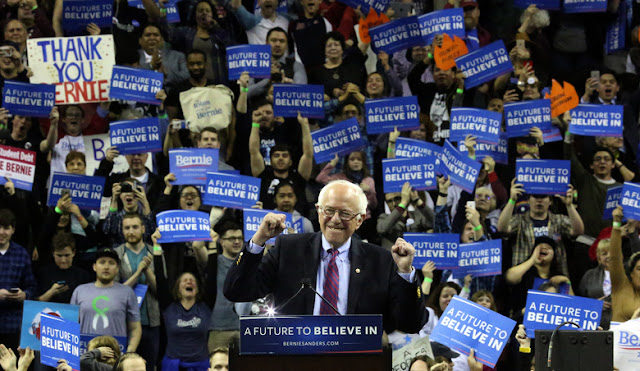 A long while back in American political history-which is to say, before the election of Donald Trump-Bernie Sanders supporter John Laurits wrote a piece titled The Only Candidate That Can Defeat The GOP, According To Math. In it, as you've no doubt guessed by now, he laid out the simple facts, which were that Sanders, not Clinton, was the Democratic candidate who could appeal to enough Democrats and independents to be able to win against Trump.

But to consequences yet to be fully determined, Democratic leaders chose to disregard this and other pieces of evidence that their preferred candidate was not up to the job of beating Trump, and they blocked Sanders' nomination. And now, with our political system having hit what the writer Michael E. Sparks considers to be rock bottom, the need for an effective electoral counter to Donald Trump and those who share his neo-fascist political brand is greater than ever.

So it's imperative that as Democrats and others who oppose Trumpism work to defeat it going into future elections, they don't repeat their mistake from this year.

Just as establishment Democrats continue to dismiss the possibility that Sanders would have defeated Trump, they dismiss the possibility that Sandersism has the potential to defeat Trumpism if made the standard ideology of the Democratic Party. Paul Krugman, for instance, who has ironically made passionate arguments in favor of economic populism, has lately adopted a more neoliberal attitude when responding to the idea that Democrats need to start appealing to the working class; another defender of the Democratic political status quo is Nancy Pelosi, who has said she doesn't think Democrats need a new direction because "Our values unify us and our values are about supporting America’s working families."

I'm going to make the case now, like Laurits and others tried to earlier this year, for Sandersism, not a continuiation of Clintonism, being the only way to go forward. And I'm going to start by providing the evidence of why a failure to embrace Sandersism resulted in Trump's victory.

The reason Clinton lost had nothing to do with the third party candidates or Bernie Sanders (the latter of which actually helped her get more votes), but rather a failure on the part of her and the Democratic Party to present a compelling case that they intended to help working people. Specifically, the working people who live in Rust Belt. If Clinton had won just a few more states in that region, she would have received the majority of electoral votes, but that proved to be impossible after the approach she used to this election.

The people who decided the outcome of those races, exit polls indicate, regarded economic issues, especially trade, as highly important. And when presented with Clinton vs Trump, a consequential number of them understandably went with the latter. Clinton, despite having branded herself earlier in the race as pro-worker on trade, was hard to trust on the issue for many people due to her history of supporting neoliberal trade deals, the fact that she had since appointed a Trans-Pacific Partnership advocate to be the head of her transition team, and how her campaign received massive donations from corporate executives who stood to benefit from the TPP. All of this evidently cost her the election in what Michael Moore calls a "Rust Belt Brexit."

Another way Clintonism proved to be an ineffective strategy for the Democrats this year was that it depressed voter turnout. As Moore has also noted, the demographics made it so that Hillary Clinton always easily had enough support to win, but due to her unwillingness to appeal to the Democratic base, not enough people showed up to make it happen.

The low Democratic voter turnout this year which cost Clinton the election for the most part did not occur because of Republican voter suppression efforts, and the reasons for this fact are easy to guess. Even after the victory of Clinton's extremely unpopular opponent, polls continue to show around 55% of Americans view her negatively, and in a stunning demonstration of how suspicious Americans are of her, one poll from earlier this year found that 68% view her as untrustworthy compared to 43% for Donald Trump. The same survey also showed just 38% would be proud to have her as president, compared to Trump's 39%.

And the reason for this does not have to do with decades of Republican smears on her as she has alleged. Polls have shown that most Americans know how to sift through the false accusations that have been leveled against Clinton, indicating their dislike for Clinton has more to do with the fact that they disagree with her on many important issues.

Just 29% of Americans think that trade deals like NAFTA have benefited the country, 78% want an end to Citizens United and money in politics, 62% are in favor of breaking up too-big-to-fail banks, 58% support a federally funded universal health care system, 63% prefer a $15 minimum wage, and on the list goes of ways in which vast majority of the public wants to end the neoliberal paradigm and make the economy work for everyone. But given Hillary Clinton's corporate campaign donations and her open opposition to many of these goals, it's clear that she was not the right option for those who hold such views, and as a result, she's been proven unable to win a national election.

It's this same problem that has gotten the Democratic Party into its current crisis. Despite Pelosi's assertions to the contrary, for the past forty years the party's values have mainly involved supporting corporations and the super rich rather than working families, and just like Hillary, they've failed politically because of this. It's no coincidence that the Democrats' gradual decline throughout the last few decades has happened at the same time as the party has pivoted to the interests of big business, with the Democratic leadership's abandonment of their base having made them lose most of the white working class (along with some of the nonwhite working class).

And once again, the Democratic Party has suffered a similar fate to that of Hillary Clinton due to its shift towards neoliberalism, with Democrats now holding as few elected offices as they did in the 1920's. This is due to a failure on their part to sufficiently motivate their base to show up at the polls. And if the party continues to try to appeal mainly to the quarter or so of the electorate which supports neoliberal policies, their decline will only continue.

However, if the efforts of Bernie Sanders and others succeed, the Democratic Party can yet become an institution which advances both identity politics and economic populism (which, contrary to the narrative of the corporate media, are not mutually exclusive approaches) and assume the role of the dynamic political tool needed to fight Trump's agenda. And should the Democrats remain a party of the economic elite, it will be replaced by an alternative organization, be it the Green Party or something else.

But electoral politics isn't the only political aspect wherein Trump's opposition will need Sandersism to succeed. Should a major crisis develop during Trump's term, he and his administration will likely try to use it as an excuse to gain bipartisan support for a series of authoritarian and hawkish measures they'll surely push for in response to it. And if the main opposition that they face consists of Clintonist Democrats like Chuck Schumer, who aims to act as Trump's ally, a forceful response from progressives will be absent and enormous damage will be done to global stability, the rights of working people, and America's constitutional liberties.

In short, if the left wants to have any success, it will stop letting its leaders pivot to "moderates" and "the center" and have them appeal to the majority of the Americans, who  support the ideals and values of Sandersism. Lack of a major Sandersist presence in the 2016 general election resulted in the victory of a tyrant, and lack of a major Sandersist presence afterwords will result in a victory for that tyrant's agenda.
Posted by Rainer Shea at 2:00 PM