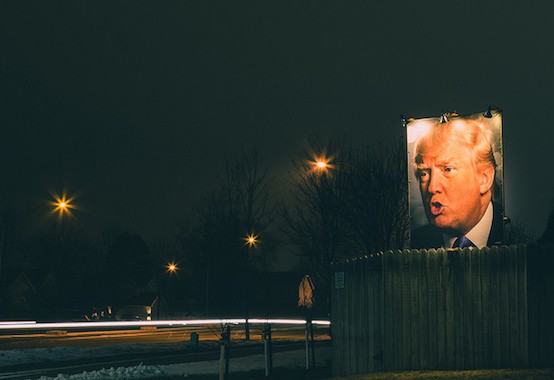 As of this writing, it's been a few hours since the members of the Electoral College sealed America's fate and officially appointed Trump to be its 45th president. But there's some confusion as to just how bad this fate of ours will be; some expect Trump's term to be America's equivalent of the Third Reich, while others hold a far less extreme (and probably more realistic) view of who this man is and what he's likely to do as president.

However, the fact that Trump isn't literally as bad as Hitler comes as little comfort to me.

I've become convinced that the best year in history to compare 2017 with will not be 1933, but 2001. At that time, you no doubt remember, America elected (if you can call it that given how his opponent won the most votes) a highly incompetent and in many ways comical figure. In the first months of his presidency, his administration acted in an unpopular but politically routine fashion, causing his political opponents to easily recover from their loss in 2000 and get ready to start taking back their government in future elections.

That is, until you-know-what happened. After 9/11, George W. Bush's approval ratings went from 51% to 90%, and his party's favorability ratings went from 48% to 59%, giving his administration an opportunity to turn into something authoritarian and dangerous. Bush and Friends created a surveillance state, violated the Bill of Rights with their policies of indefinite detention and trial-less arrest, went against the Geneva Conventions by adopting torture, and used the attacks to push through numerous other less egregious but still corrupt goals, all with the consent of most people of the time.

This story is, quite seriously, that of a time when America had its bout with fascism. And as Trump enters the picture, I believe we'll need to prepare for something many times worse.

My consideration of a scenario wherein a 9/11-level terrorist attack occurs during Trump's term is more than speculation; it's a possibility that I believe has a very good chance of being realized. Michael Moore, who has a history of making fantastic but accurate predictions about Trump, has concluded this month that Donald Trump's unwillingness to attend daily security briefings is "gonna get us killed:"


So, my fellow Americans, when the next terrorist attack happens -- and it will happen, we all know that -- and after the tragedy is over, amidst the death and destruction that might have been prevented, you will see Donald Trump acting quickly to blame everyone but himself. He will suspend constitutional rights. He will round up anyone he deems a threat. He will declare war, and his Republican Congress will back him.

And no one will remember that he wasn't paying attention to the growing threat. Wasn't attending the daily national security briefings. Was playing golf instead or meeting with celebrities or staying up til 3am tweeting about how unfair CNN is. He said he didn't need to be briefed. "You know, I think I'm smart. I don't need to hear the same thing over and over each day for eight years." That's what he told Fox News on December 11th when asked why he wasn't attending the security briefings. Don't forget that date and his hubris as we bury the dead next year.

In other words, in addition to the countless other ways that Trump has failed upwards throughout his political career, his incompetence is going to bring him a great reward-a crisis which works to his partisan advantage. It's unclear just how many constitutional liberties will become irrelevant in the aftermath of Trump's 9/11, or how little dissent the government will tolerate, or how destructive the inevitable military conflict will be, but given how the Bush team looks friendly compared to Trump and his cabinet members, it's reasonable to assume that post-9/11 America's fascism will seem tame compared to what's coming.

And I'm not the only one who's anticipating this development. Anyone who acknowledges the dangerous nature of Trump and his transition team can easily imagine them doing some very frightening things in the event of a crisis, among them Chris Hedges, who believes that "The pretense of democracy will end" after Trump's 9/11 event. Another one of these political doomsday believers is Ted Rall, who has written in regards to the actions he expects Trump and Friends will take following this disaster: "Remember how, the morning of the election, the New York Times gave Trump a 15% chance of winning? Given that I’ve been saying The Donald had an excellent chance of winning for many months, maybe you should be scared when I tell you what I think there’s really a 15% chance of: another presidential election in four years."

In short, while Trump may not be as big a threat as Hitler was in that he has no plans for mass genocide, and his lack of core convictions make him unlikely to follow through with his promises to deport millions and bar Muslims from entering the country, his state of mind is similar to that of Hitler and his one core value is a desire for attention, respect and control. And should a major crisis occur during his term, his power will be greatly increased, his for now inarticulate and crude brand of fascism will take on a solid and terrifying form, and he'll turn into what could indeed be America's version of Hitler.

But just as Trump's post-crisis rise to authoritarian dictatorship will be far more substantial than that of Bush, I suspect Trump's downfall will be all the more precipitous than Bush's. America has and has been for a long a time a very liberal country, and so the attempted political domination of figures like Bush and Trump is not sustainable. In the case of the former, it only took a few years after 9/11 before Bush and his party became greatly unpopular, Democrats began to win in all aspects of electoral politics, and left-wing ideas came to dominate the debate.

And ultimately, I expect Trump and his Republican Party to meet a similar fate. Since Trump is far less popular or likable than Bush was in 2001, I believe his post-crisis approval ratings will be a lot lower than 90%, and that they'll then go back down to their current level of about 40% within only a few years. This could very well mean that, unlike Bush, Trump won't be able to win re-election. Additionally, the horrific war crimes and assaults on civil liberties that Trump and his party are sure to commit in the wake of the disaster will no doubt come to bite back at them politically, with their opponents being motivated to take an enormous amount of action to combat Trumpism and the neoliberal paradigm which produced it.

Why do I think this will be case, though, if, as Hedges and Rall say, there's a good chance Trump will gut America's system of representative democracy? Well if Trump could defy the supposed odds and win the presidency, I think the American people could very well pull off something similar and successfully fight for the preservation of their country's constitution. If there's anything Trump has taught us, it's that a 15% chance of victory is not the same thing as a 0% chance.
Posted by Rainer Shea at 5:17 PM