If The Greens Were In The Same Position As The Democrats, Republicans Wouldn't Stand A Chance 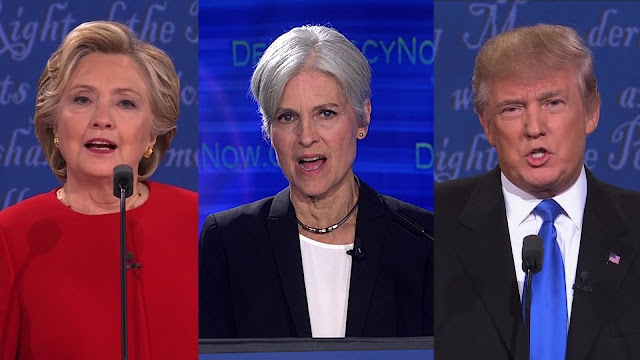 Thanks to Donald Trump's terrible performance in the first presidential debate, along with his recent bizarre behavior on Twitter (where else?), he's quickly losing any advantage he might have had the potential of gaining in national polls, with recent surveys from key states reflecting a similar trend. If Trump doesn't restrain from further antics, the landslide loss for him that Robert Reich has been expecting could very well come true this November.

There's just one thing, though, that might allow him to defy the odds: the fact that he's running against a Democrat.

Or at least, the kind of Democrat that the party's leadership prefers. Had the Democrats' electoral system allowed Bernie Sanders to be their nominee, Trump would likely now be behind by at least ten points, and Democrats would be in a good position to take back the Senate. Instead, despite Trump's utter awfulness as a candidate, the Democrats are stuck with someone who is only 3.1 points ahead in the Real Clear Politics polling average and has a good chance of losing that lead. Meanwhile, despite a general assumption among Democrats that they're favored to take back the Senate, it looks like Clinton is costing them that victory as well, with CNN giving Republicans a 69% chance of retaining their majority in the Senate. (Democrats aren't likely to retake the House, either, but that's a different story).

Intuitively, this makes no sense. This is 2016, when the electorate is the most diverse in American history (Michael Moore summarized just how lonely Republican-leaning voters are last year by stating that the electorate is "81% women, people of color, and young people"). The polls show that most Americans disagree with Republicans on virtually every issue, and despite the emergence of Trump's right-wing reactionary politics, the progressive movement is in a very good position. In their December 2015 issue, the Atlantic magazine portrayed the situation that Republicans are in with a drawing of a sad old elephant standing on the top of a crumbling little rocky peak, with a donkey standing comfortably on its back. 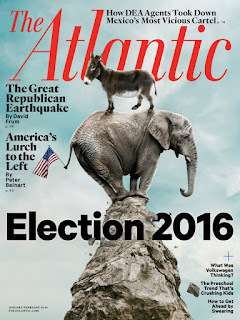 So why aren't Republicans losing? I'll put it this way: that donkey may feel safe, but just like the elephant, it's standing on unstable ground.

By this, as you may have guessed by now, I mean that Democrats essentially share the Republicans' agenda. In a recently leaked audio tape of Hillary Clinton's remarks at a private fundraiser earlier this year, the party's leader sums up her agenda-and how she views those who disagree with it:


It is important to recognize what's going on in this election. Everybody who's ever been in an election that I'm aware of is quite bewildered because there is a strain of, on the one hand, the kind of populist, nationalist, xenophobic, discriminatory kind of approach that we hear too much of from the Republican candidates. And on the other side, there's just a deep desire to believe that we can have free college, free healthcare, that what we’ve done hasn't gone far enough, and that we just need to, you know,  go as far as, you know, Scandinavia, whatever that means, and half the people don't know what that means, but it's something that they deeply feel. So as a friend of mine said the other day, I am occupying from the center-left to the center-right. And I don't have much company there. Because it is difficult when you're running to be president, and you understand how hard the job is—I don't want to overpromise. I don't want to tell people things that I know we cannot do.

Aside from the condescending nature of those statements, they make apparent everything that's wrong with the Democratic Party.

First off, it seems that Clinton is the one who doesn't know what it means to go as far as Scandanavia. Unlike Clinton, who thinks that single-payer health care will "never, ever come to pass," 58% of Americans support such a measure according to the latest poll. (And as the costs from the inadequate, profit-oriented health care option that she and her party supports continue to accumulate in the coming years, public demand for single-payer will most certainly mount.) Additionally, 62% of Americans want college to be tuition-free, a goal that Clinton's plan for the matter does not, despite the claims associated with it, even come close to meeting.

Aside from these relatively minor (but still important) problems with Clinton and the Democratic Party, there are others which should trouble anyone who cares about the terrible grip that banks and corporations hold over our government and our economy. The Democratic National Committee, like their presidential nominee, is, as the New Republic puts it, "one big corporate bribe." Its top donors, which have included such champions for working people as Bain Capital and Goldman Sachs, play a core part in its existence and thus hold a certain degree of power over the entire party (who's members in the House and the Senate are largely corporate-funded as well). It would be dangerously naive to assume that none of this effects how Clinton and the her party approaches economic issues, because as Tony Wilsdon writes in regards to this all:


However, the sometimes sharp contrast with the Republicans on social issues does not change the fact that the Democratic Party is a political party of the 1%. President Obama is only the most recent example. Despite the enthusiasm he built up when promising a break from Bush’s policies, his first move was a trillion dollar bailout of Wall Street banks. The main thrust of his policies have been aimed at reviving U.S. capitalism – not providing for the needs of the 99% who are still suffering the effects of 30 years of neoliberal policies. His failure to enact a serious jobs program, provide real relief to homeowners and renters hit by the housing crash, or to dismantle mass incarceration and the drug laws, are telling — as are the record numbers of deportations and drone bombings on his watch.

To move onto perhaps an even more important point, the title of that article is Can The Democratic Party Be Reformed? The conclusion that Wilsdon comes to when asking this question, which is one that cannot be answered with a simple "yes" or "no," is basically "yes, but it's not worth it."


The Democratic Party is not a vessel that can be filled with new progressive content. It is a brutal instrument that has been honed by the corporate elite to deliver its policies. The corporate elite, alongside the entrenched Democratic Party leadership, are not about to give up control of a corporate party that served it so well, and if they need to break a few rules that will not deter them. The power given to the unelected super delegates is a clear example of the lengths the leadership will go to when necessary to defend the interests of their corporate sponsors.

In short, now that the Democratic Party has undergone its fall from grace, there is no reclaiming it. Though I appreciate the efforts of Bernie Sanders and others to save it, that ship has sunk. Sometime since the Atlantic illustrated the position of the two major parties last year, it appears that the donkey, in its delusion of being immune from harm, has jumped off of the elephant's back. And now the elephant is savoring its position as the last one on top of that teetering rocky tower, happily waving the American flag that it's holding in its tail and gloatingly sounding its trunk at the Atlantic writers who once assumed that it was going to fall off the precipice.

Most likely, I believe, this scene is going to play out in real life as follows: this November, Republicans will retain their majorities in the House and the Senate, which, even if they don't take the White House, means that they'll be in control of the government. For two or four years, they'll keep their footing on that rocky peak, but before long, the ground will finally fall out from under them and they'll lose their power. But unless that donkey has made a miraculous medical recovery by then after foolishly jumping to its near-death, the party that replaces the GOP will not be the Democrats.

Given the facts that I've mentioned, many are seeing the rise of a genuinely populist alternative on the horizon. Among them is Counterpunch writer David Rosen, who has very believably predicted that "The election’s winner, whether Democrat or Republican, is likely to usher in a period of unexpected instability, even disruption, as the parties seek to regain control over the electoral system, the American voter. They may fail. Both parties are poised for possible break-up, but along very different ideological lines."

You can look to nearly every other one of my articles on this site for elaboration on why I believe that America's two-party system is soon to give way to something better. But as long as we're getting into the realm of the hypothetical, consider the following scenario:

It's 2028, and like the Democrats in 2016, the Greens (a very good third-party alternative to the left's former standard-bearers) have been in control of the White House for the past eight years. After winning all three branches of government over the course of the last decade, they've been able to enact radical changes for the country, having passed universal health care, a breakup of the big banks, a return to Roosevelt-era taxation levels on the wealthy, and many other much-needed goals. As a result, they've been able to for the most part dominate politics because of their overwhelming support from millennials, a generation that now makes up the majority of the electorate.

The reason they're winning is that unlike the Democrats, they understand that you aren't truly running against an opponent when you've decided to become like your opponent.
Posted by Rainer Shea at 11:58 PM