The Two-Party System Does Not Exist 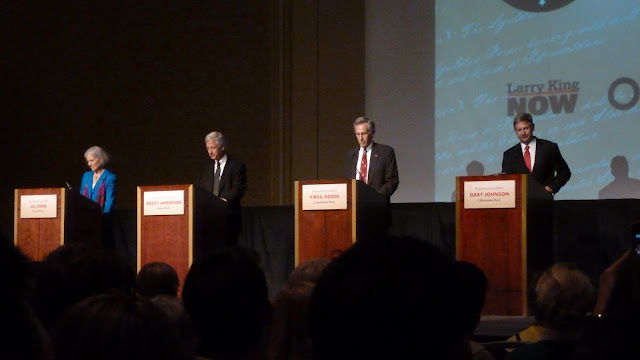 If one wants to consider the U.S. a democracy, they'll first need to significantly lower their standards for what the word means. It's been confirmed that the actions of government officials and other elites are highly inconsistent with the wishes of the citizenry, and given the state of the electoral system that brought them there, this isn't at all surprising; from widespread gerrymandering to the Electoral College to the corporatized campaign finance system, the electoral process has been fundamentally subverted to favor the candidates of the people who run it. This applies to America's voting system as well, which has been found to be the most unfair of any other democracy in the world. The consequences of this have lately been felt most dramatically in elections like the Florida Congressional primary between Tim Canova and Debbie Wasserman Schultz, or the 2016 Democratic presidential primary between Bernie Sanders and Hillary Clinton.

But the problem goes deeper than all of this.

It feels trite to include a quote from a founding father to prove my point, but this 1780 statement from John Adams is the perfect summation of one of the biggest flaws in our electoral process:

"There is nothing which I dread so much as a division of the republic into two great parties, each arranged under its leader, and concerting measures in opposition to each other. This, in my humble apprehension, is to be dreaded as the greatest political evil under our Constitution."

And thankfully for Adams, such a scenario never appeared in his lifetime. But had he lived two more years to see the election of 1828, he would have been in for an unpleasant twist. After decades of the United States' party system functioning just as Adams preferred, with little tendency towards the country's many parties coalescing into just two, everything changed.

After the contested election of 1824, in which Andrew Jackson lost the presidency despite having won the popular vote, the members of Jackson's Democratic Party spent the next four years feeling rightfully resentful towards the candidate that had beat him (who, I think it's worth emphasizing, was Adams' son John Quincy Adams). By the time Jackson was nominated again four years later, the anger on the Democratic side had firmly united the party in opposition towards their opponent, which naturally instigated political polarization. After a fittingly intense and dirty campaign, Jackson had, in the process of reclaiming the presidency, created a political environment that was dominated far more than ever by two parties-the Democrats and the Whigs (the latter of which would afterwards evolve into Republicans). During the following election cycles, the political duopoly continued to solidify itself, beating down all competitors from other parties and turning America into just what John Adams had feared the most. The irony is that Adams' son is the one who shares much of the blame for this.

And the rest, as they say, is history that we quietly regret having let happened. None of the efforts to return the American party system to its pre-Adams vs Jackson state have gained enough support to be successful, and the consequences of the public's failure to get behind them have turned out to be just as disastrous as Adams foresaw.

For a long time, it seemed as if there was little reason to eliminate the two-party system. Over the generations, the major parties changed their agendas to accommodate the wishes of their supporters, which, aside from instances like the Progressive Party's challenging the Republicans in 1912 or the Dixiecrat's breaking from the Democrats in 1948, kept it so that they both largely represented the interests of their base and thus provided the public with no immediate reason to overthrow them. But during the late 20th century, the fear implied in Adams' sentiment of two parties abusing their power began to come true. With the help of a series of cultural factors that were introduced through the neoliberal policies of the Reagan/Bush years, Democrats, the party formerly depended upon for keeping corporate rule at bay, were transformed it into an institution that was more or less as oriented towards serving the one percent as Republicans were.

That was when the cost of two-party politics truly began to be felt; confident in their position as members of one of the two ruling parties, the Democratic elite continued to wreak havoc over the middle-class and the poor despite their base wanting the opposite. They've since consolidated the news industry, deregulated Wall Street, passed free trade deals, instigated military conflicts, and helped turn the banking industry into a ticking economic time bomb, and yet they've still enjoyed the support to keep them a major political party. This, along with the similar actions that Republicans have taken, has resulted in all of the problems that are threatening to create a decline of the United States and perhaps tear apart civilization itself, such as escalated wars, record income inequality, and climate change.

And if America's two-party system is not undone soon, those aren't the only threats that will continue to get worse. As we've seen all-too-clearly this year, the neoliberal paradigm that this party model has created is giving way to the dark, counterproductive form of populism which is Trumpism, and unless a socially democratic antidote for it is introduced-something which the Democrats are in no position to be the party which does so-politics will soon become dominated by Trumpism. The consequence of this, as Arthur Goldhammer summarizes, is ironically an extension of those divisive, polarizing forces which spawned the two-party system in 1828: "If they [the Trumpists] succeed in their attempt to drive a wedge between us and them, we can expect the polarization of today’s politics to devolve into something far worse than mere gridlock, something resembling tribal warfare."

But there's just one obstacle for this descent into the political black lagoon: the two-party system does not exist.

Or at least it doesn't exist in a healthy democracy. In an undeniable contradiction to the popular myth among American political scientists that the two-party system is an inevitable phenomenon in every democratic system, virtually every other democracy on the planet has a multiparty system like the one of the U.S. before 1828. For example, though all of the UK prime ministers in recent memory have been members of either the Labour Party or the Conservative Party, 16 parties have representation in its parliament. That number for Germany is 14, 5 is the case for Canada, Australia's amount is 7, and so on and so on. This gives the voters of those countries far more freedom than Americans have, in that they can find parties which reflect their ideals without tied down to two ideologically narrow options which actively try to crush dissent.

And it's not a pleasant fantasy to think that this can change for America in the near future. In time for the next election, millennials, a group that can be relied upon for thinking outside of the political box, will make up 40% of the electorate. As a result of the wealth gap, a populist revolt is certain to emerge in the coming years which could easily have a radical effect on electoral politics. These factors, along with the political realignment that's already been building up for many years, serve as compelling evidence that the ancient, archaic American party system could be disrupted in the next one or two election cycles. And this upset might not just take place in the form of the leftist third-party counter that I'll be on the side of; an ideological split is occurring on the right as much as the left, which has caused the author Jeffrey Sachs to believe that "By 2020, it is quite possible that we will actually have four major political parties: a social democratic left, a centrist party, a right-wing conservative party and a populist anti-immigrant party (represented by Trump followers)."

In short, America's party system should not-and soon might not-have to be this way. The two-party reality that we (and our grandparents' grandparents) have known all our lives is not the result of some kind of inescapable law of politics, but of a bitter dispute between two men in 1828. If we can break out of this matrix in time for the great showdown in 2020, we'll be able to reclaim both our democracy and our hopes for sustaining the society which supports it.
Posted by Rainer Shea at 11:33 PM