Why A Third Party Is Our Only Chance To Defeat Neoliberalism 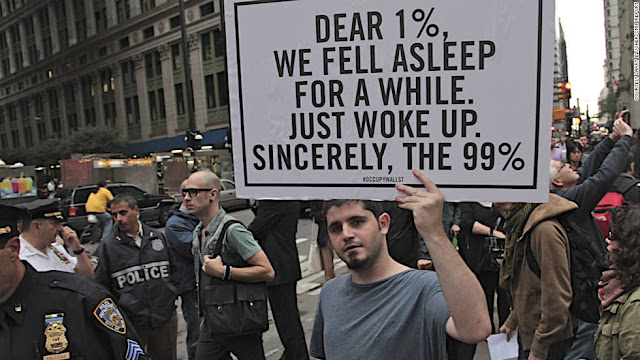 In my previous article, I attempted to address a pressing issue facing the future of American politics: reactionary populism may be what succeeds instead of progressive populism. To restate what I said in that last essay more succinctly, the political revolution that Bernie Sanders started has a few obstacles ahead of it.

In response to the massive wealth inequality that's appeared around the globe in recent decades, the lower classes in many industrial nations are revolting against their traditional political leaders. But perhaps out of human nature or some other factor, in nearly all cases, these populations are gravitating towards a brand of populism that blames their woes on immigrants, racial minorities, and other scapegoats. Though the economic elite would of course best like no kind of revolt at all, they find this preferable to one that promotes the democratic socialist policies which would actually hurt their interests.

In other words, the populist anger of the masses is being redirected in a way that keeps the centers of power intact. And if the movement's trajectory isn't changed towards something positive and sane, the problem of inequality will only get worse.

So how do we reverse this dangerous trend? As I also said in my last article, it's more or less reversing on its own. More than 60% of Americans think the distribution of wealth is unfair, 61% think that the rich pay too little taxes, there's a majority consensus that free trade deals are bad for America, 78% want Citizens United overturned, and in the clearest sign that Trumpist politics won't be able to win without a fight, 72% think that undocumented immigrants have a right to stay in the U.S. And with millennials expected to make up 40% of the electorate in time for the next presidential election, a group that regressive politicians do even worse with, those poll numbers are guaranteed to grow bigger.

But most Americans have held these views for a long time. And as we've seen, the Democrats, the party that's supposed to address these concerns, has failed to.

This puts the country in a very dangerous position.

Despite having experienced a large drop in the polls in the last few weeks, Donald Trump has now officially regained his competitiveness with Hillary Clinton. This says a lot about the state of American politics. Clinton, the embodiment of everything wrong with the Democratic Party, is at risk of losing to the American manifestation of the worldwide reactionary phenomenon Donald Trump. However clownish and lacking in charisma Trump is, he's managed to wield this dark new power, and up against someone like Clinton, it's more or less worked.

And whether Trump actually wins or not, this dynamic is destined to repeat itself. In future elections, we can expect a newly-in-demand breed of Republican candidates who run on the same degenerate form of populism as Trump to succeed when running against Clintonist Democrats who fail to energize the leftist base. And as John Feffer describes in his prophetic piece The Most Important Election Of Your Life Is Not This Year, this could turn into something quite scary.


The real change will come when a more sophisticated politician, with an authentic political machine, sets out to woo America B [conservative America]. Perhaps the Democratic Party will decide to return to its more populist, mid-century roots. Perhaps the Republican Party will abandon its commitment to entitlement programs for the 1%.
More likely, a much more ominous political force will emerge from the shadows. If and when that new, neo-fascist party fields its charismatic presidential candidate, that will be the most important election of our lives.
As long as America B is left in the lurch by what passes for modernity, it will inevitably try to pull the entire country back to some imagined golden age of the past before all those “others” hijacked the red, white, and blue. Donald Trump has hitched his presidential wagon to America B. The real nightmare, however, is likely to emerge in 2020 or thereafter, if a far more capable politician who embraces similar retrograde positions rides America B into Washington.

Do we really want to let it come to that?

To tie together this seemingly incoherent series of subjects I just had you read, the neoliberal order has found a way to preserve itself by letting proto-fascist demagogues keep the revolting public distracted with xenophobic scapegoating, and while the left-wing opposition to such divisive politics is strong and growing, it will fail to mobilize as long as it's being asked to unite around a deeply corrupt Democratic Party that doesn't represent its values.

As David Harvey said about the place the political system has currently been forced into by inadequate representation of liberal goals, "I think much of the Left right now, being very autonomous and anarchical, is actually reinforcing the endgame of neoliberalism. A lot of people on the Left don’t like to hear that."

The solution is clear: build another party, based on principles of peace, compassion, social and environmental justice, and getting money out of politics, which the coming majority of young and politically independent voters can rally around. The 2016 election has reflected the future of American politics in this way as well; Bernie Sanders, the candidate who upheld all of these goals, was shown to defeat Trump by a far wider margin than Clinton, precisely because he had the ability to energize and inspire the far-left majority.

And while Sanders himself was forced out of the picture, the stage has been set for a future showdown between Sandersism, Clintonism, and Trumpism. In 2018, 2020, and beyond, we'll see a contest between far-right Trumpist candidates who are trying to turn the public's dissatisfaction with the system towards fear, middle-of-the-road Clintonist candidates who are trying to convince their ever-shrinking group of followers that the system works, and far-left Sandersist candidates from a third party who will try to get the vast liberal population, along with Clintonist and Trumpist voters, to believe that a better world is possible if they embrace the politics of love rather than fear or indifference.

This shift in the game is inevitable, but Sandersism winning the game is not. The forces of cynicism and divisiveness have the backing of the entire establishment, and we'll need to battle them with everything we have to come out on top. As James Kunstler said about the uncertainty of the outcome of America's changing political landscape, "Who knows what comes out of this vacuum, what rough beast slouches towards Washington."

You are this beast. You are the voting public, who will decide which direction our country takes. For your own sakes, use your power wisely.
Posted by Rainer Shea at 10:53 PM