Why I Have Faith In Our Revolution 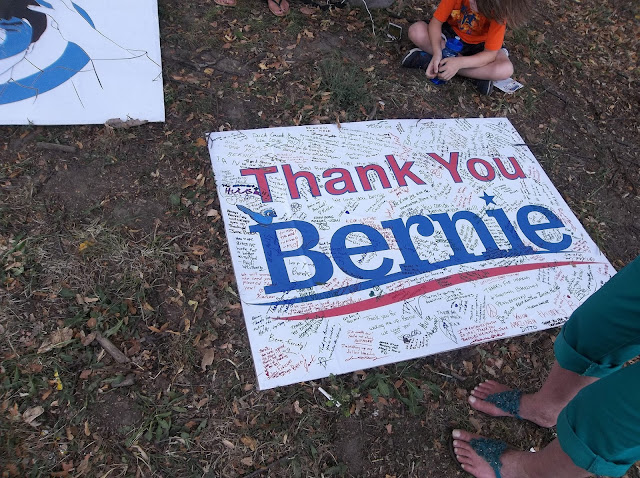 Today Bernie Sanders began his second presidential campaign. Except in this case, he isn't running so that he can try to change a fundamentally corrupt political institution and work within a similar Washington establishment, but to preside over the start of a national movement of citizens who want to change the system quite literally out of self-preservation. Except this time the members of his campaign know that change cannot be achieved through trying to reform the party system but by replacing it altogether, and despite Sanders' positive comments today about the Democratic platform and the many progressive Democrats running for office, I suspect that he knows this as well.

Of course this new campaign will involve electoral politics as the old one did, since the government needs to be reformed as much as anything else in order to make progress. But just as essential to its success as grassroots organizing, fundraising, and advertising will be a focus on something larger than running any political campaign: transforming society. The revolution will not win through playing the traditional game of politics, though that is nonetheless important, but through creating a general awareness that the world's geopolitical, environmental, social, and economic problems can only be solved by breaking the power of neoliberal institutions and rejecting their ideas.

This isn't going to be as easy as one would assume.

My first encounter with candidate Donald Trump was when I was listening to the radio in June of 2015. I heard a man with a somewhat nasal voice who was going on The Sean Hannity Show saying how he planned to deport all undocumented immigrants, build a wall along the Mexican border and (for the sake of the narrative, pretend like you don't already know what comes next) make Mexico pay for it. When I learned that this man, who was apparently named Donald Trump, intended to become president, like so many others I immediately wrote him off.

What followed was quite possibly the strangest turn of events in the history of American politics. In spite of having a message that appeared as if it would only appeal to the openly xenophobic and fundamentally ignorant part of the electorate-which, in the Republican Party as much as any other demographic, is a minority group-he started to gain serious ground. By September, he had gone from an absurd fantasy of a candidate to the likely nominee.

And after that, it didn't take long for things to get scary; this was a man who's candidacy was praised by a prominent white supremacist, who excused the behavior of his supporters when they assaulted a Black Lives Matter protester, who's comments towards Muslims were so offensive that the radical Islamist group Al Shabaab once used them to incite anger towards the west. And he was winning.

But even as Trump's popularity hit a new high after he so helpfully suggested that the US bar Muslims from entering the country, we comforted ourselves with the realpolitik that we'd known all our lives; there has to be some kind of limit to Trump's possible base of support. No one like him can win over the majority population of open-minded, tolerant and compassionate people. If that fact didn't stop him from winning the Republican nomination, it would most certainly stop him from winning the presidency. And we were probably right.

But that's only because in the case of Trump, we're likely to avoid a dangerous demagogue simply because he happened to be a terrible politician.

Ten years ago, the top 1% wealthiest individuals on the planet owned 40% of its wealth. Since then, that percentage has increased at a startling rate, with 62 billionaires owning 50% of the world's wealth according to a study from the beginning of this year. So naturally, starting perhaps as recently as a year ago, this fact has had an effect on politics. At least in the industrialized world, where people generally have the expectation of being able to enjoy modern life and many are gradually seeing that being taken away from them, there has been a sudden revolt against the political and economic establishment.

The uncomfortable problem with this movement, though, is that in almost all instances it's being directed in a way that will do nothing to solve the woes of the working class. From the Turkish authoritarian party Justice and Development's stunning victory in 2015 due to them having run a campaign promising security, to the Polish Law and Justice Party coming out on top that same year through similar means, to the best-known Brexit vote, right-wing politicians have been taking advantage of the growing public anger towards "elitists" and "the establishment" and diverting it from the neoliberal forces that actually caused the economy's problems towards Syrian refugees, immigrants Muslims, civil liberties, and in some cases women, gays, and racial minorities.

Last year, former George W. Bush speechwriter David Frum declared that the right-wing elite's method of getting their lower-class base to accept trickle-down economic ideas by inciting anger on social issues "stopped working at least a decade ago." He also more or less concluded that because of what's happened to the political environment, Republicans won't survive much longer if they don't move to the left. Sadly, though, I believe that they and other conservative institutions around the world will continue to do well, because as I described above, they've regained their ability to manipulate the electorate's emotions using socially far-right rhetoric as the social pathology of fear towards "the other" has increased.

Yes, opposition to free trade has also played a role in the success of Trump and others, but for the most part, the massive populist will that's sprung up in response to economic inequality is moving in the direction of unproductive scapegoating rather than actual efforts to rein in the greed of big business, increase taxes on the wealthy, and ensure the health, education, and upward mobility of all people.

The reason I don't believe such a scenario will ever come to be can be summed up by what Elzbieta Janicka, a cultural anthropologist at the Polish Academy of Sciences, once said to the author Chris Hedges when he was visiting Poland to research an article on the country's reactionary populism: "There is no such thing as human nature. Human nature is culture. It is a product of education."

It's tempting as it is cynical to look at what's happened to politics in response to this crisis and say that it's all the result of an inherent tendency that humans have to resort to irrationality and hate when faced with an uncomfortable situation. And to some extent, that is the case, as the politics of fear far better serve the egomania and authoritarianism of figures like Trump than do the politics of genuine compassion and equality. By that logic, one can only conclude that Trumpism's popularity has come about simply because the majority of people involved in national politics tend to have low ethical standards, and are more likely to adopt such reactionary tactics. In other words, the leaders share a lot more of the blame than the followers.

But in order to replace them with better leaders, the followers will of course need to step up and vote them out. And as Janicka also said, this will be something of a challenge. "When you construct an educational system and a public discourse where there is an almost total lack of critical, analytical thinking," he laments about the direction that his country's culture has taken, "where you refuse to strengthen individual human beings capable of autonomous judgment, human beings aware of their experiences and feelings, responsible for their deeds and relationship to the other, you destroy what is fundamental to an open society. It becomes exclusively about collective image, meaning collective narcissism. Liberal pluralism from this perspective is viewed as moral relativism or nihilism. There is a clash in Poland between the formal and legal frame of liberal democracy and the majority dominant culture."

For Poland and many other countries, the future for sane, progressive politics indeed appears to be uncertain. But at least in the United States, the foundations of Trumpism are weakening.

Millennials-an age group roughly defined as having been born between 1980 and 2000-can be considered the most liberal generation in history. Their historical experiences have involved a series of disastrous wars, an environmental crisis, and historic income inequality. So their views on neoliberalism, and even capitalism, are overwhelmingly unfavorable. But what sets them apart from the older parts of the electorate, who are largely bound to choose Trumpism over Sandersism in the years that follow, is that they even more overwhelmingly reject all kinds of bigotry. Despite deep dissatisfaction with their main alternative to Donald Trump, only 9% of millennials support him, which appropriately reflects the facts that 68% of them support same-sex marriage, 55% of them want a path to citizenship for undocumented immigrants, and 56% believe that abortion should be legal in almost or all cases.

Bernie Sanders nomination or not, the ideological battle between the Sandersist and Clintonist political approaches has been won by the former. It's Trumpism that will be the next major obstacle for positive change. But as this great political drama unfolds post-2016, in spite of all the primal human emotions that Trumpism satisfies, the side of social, economic and environmental justice will increasingly have the upper hand. Because in addition to an increasingly diverse electorate which will make elections increasingly hard to win for those who promote bigotry, four years from now, millennials will have largely begun to enter middle age, giving them 40% of the electorate up from their current number of 31%. With enough turnout on their part, combined with efforts from those who are older than millennials but still share their worldview, this will most certainly be a game-changer.

For now, that's all the hope I can present to you; the numbers, impossible for anyone to deny or change, that prove we can beat the forces of regression if we come together and believe that a better future is possible.

But whatever ultimately comes of this, remember these words from Chris Hedges when he was once discussing the hurdles that this movement will need to overcome:


If you read the writings of anthropologists, there are studies about how civilizations break down; and we are certainly following that pattern. Unfortunately, there’s nothing within human nature to argue that we won’t go down the ways other civilizations have gone down. The difference is now, of course, that when we go down, the whole planet is going to go with us.


Yet you rebel not only for what you can achieve, but for who you become. In the end, those who rebel require faith — not a formal or necessarily Christian, Jewish or Muslim orthodoxy, but a faith that the good draws to it the good. That we are called to carry out the good insofar as we can determine what the good is; and then we let it go. The Buddhists call it karma, but faith is the belief that it goes somewhere. By standing up, you keep alive another narrative. It’s one of the ironic points of life. That, for me, is what provides hope; and if you are not there, there is no hope at all.

We are there, and we'll still be there when the world needs us most.
Posted by Rainer Shea at 8:19 PM