Face It, The American Party System Is A Form Of Divide And rule 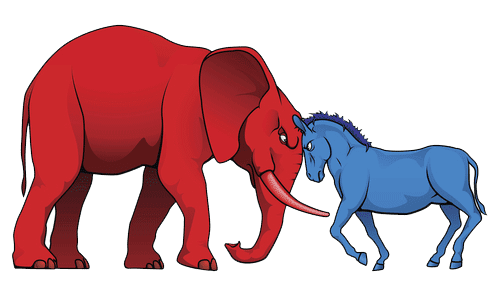 For me to explain that there's a partisan divide in this country is almost an insult to the reader's knowledge of politics. As of this year, possibly because of the two contemptible presidential nominees that Republicans and Democrats have acquired, the majority in both parties hold a highly unfavorable view of the other group. Outright fear of the other side is at 49% among Republicans and 55% among Democrats. The number of Republicans who cite the policies of the other party being destructive as a "major reason" for their affiliation is 55%, and Democrats aren't far behind at 51%.

We can talk about division between the two all day. But what, exactly, are they fighting over?

The reason seems clear: they disagree with each other on an almost fundamental level. And at least generally speaking, the worldviews of the two groups do indeed differ greatly. The main problem with the American party system, though, is bigger than that of the Democrats not representing the populist interests of its base; it's that because of the highly competitive attitudes between the two parties, Americans from both groups are being manipulated into supporting the status quo.

Though most Democrats and Republicans of course have favorable views of their parties, the sad irony is that their main reason for supporting them has little to do with actually liking their party's goals. Continuing the statistics from the first paragraph, just 30% of those in the GOP say that its policies are a major reason for their support of it, and that number for the Democrats is 34%. This underscores an uncomfortable truth: many Americans affiliate with certain political groups simply because they see the alternative as intolerably worse.

The only real differences between the two parties, which they both use to make themselves seem appealing, are the ones that have nothing to do with the larger issues of neoliberalism and oligarchy; gun control, abortion, gay marriage, and other such areas of debate. These (relatively) inconsequential but deeply dividing subjects are what made the religious right strongly on the side of the Republicans, and what keeps most women, LGBTQ individuals, and other disadvantaged groups on the side of the Democrats.

Despite their different ideological approaches, most self-identified liberals and conservatives alike want the economy to be stronger, money out of politics, and their own interests secure. During the formation of the modern two-party system, though, non-elite conservatives were misled into supporting an economic system that favors those on top with promises from Republican leaders to protect their traditional values, and liberals of a similar position were duped into supporting a party that favors the same economic system with the promise of helping socially progressive goals. This is somewhat of an oversimplification, and sadly there are many in these two groups that still believe their parties care about their financial well-being, but this is a short explanation of the methods these two institutions have used to build their support.

The result of this dynamic can best be summed up by Philip of Macedonia in his term "Divide and rule;" in this case, the ruling corporate powers are in control of both main political groups from behind the scenes, and the people, who are enamored with the groups they choose to identify with, are kept preoccupied with fighting each other instead of uniting against their true enemy.

It's a shameless and manipulative strategy. But I'm sad to say it's worked on us, and for a long time now. However, the one flaw in this game is that sooner or later, it reaches a breaking point, and that's happened this year. The divisive and irrational rhetoric that Republican elites have used to keep their support, along with the economically damaging policies they've pursued, has produced Donald Trump, a semi-fascist demagogue who's driving more and more people away from the party. (Though their main problem is even bigger than Trump.) And on the Democratic side, the refusal of party leaders to allow an insurgent candidate a fair chance or change their message and agenda in a way that serves populist interests is once again costing them an invaluable demographic in a realignment that I expect will do them in for good.

Indeed, the only card the two parties have left to play at this point is the one they've always been playing, which is fear of the other side. In the case of Trump's bigotry and hatred, some of that fear may be legitimate, but whoever you think is worth voting for this year, after this little charade is over the country will be able to move on.

Though partisan animosity is unlikely to cool down among Democrats and Republicans, soon there won't be enough support within the two groups to make that relevant. People are walking away from this tiresome game of fighting the other side in the hopes that it will solve the country's problems, and never seeing anything being solved regardless. There's no telling exactly what the political landscape will look like after the two major parties lose their dominance, but when Americans are freed from them, whatever happens, unity, not polarization, will be what defines us.
Posted by Rainer Shea at 1:11 PM