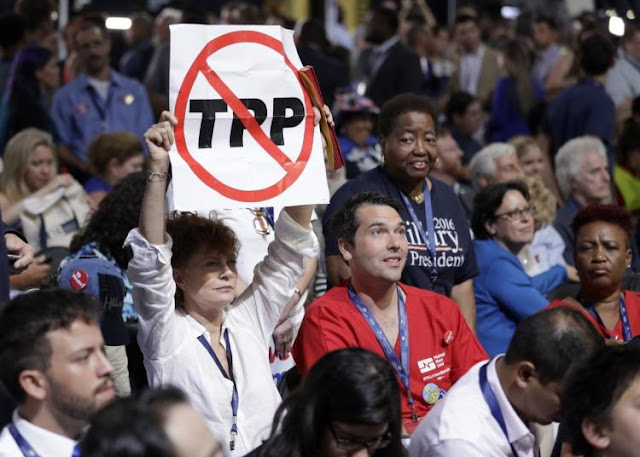 In a May 13 article, decidedly observant person Walter Bagman made a good observation: Hillary Clinton's Democrats are America's next Republicans. He says that they tend to be older and more affluent, and that they have "Decidedly negative views of Bernie Sanders, and the kind of economic populism he is promoting." He says that because of their comfortable economic position, their ideology "rests on the belief that nuance dictates moral ambiguity." And so from their perspective many issues, aside from those having to do with social justice, are not deserving of their concern. That includes income inequality, neoliberal trade deals, and destructive foreign policy.

There's one thing it doesn't mention, though: not very many of the "New Republicans" actually exist.

Bagman is not talking about Hillary Clinton's supporters in general. He isn't talking about the millions of middle and working class citizens who supported her in the primaries not because they wanted more unnecessary wealth for themselves, but because she promised to give them the amount of wealth they deserved. The same should be noted when criticizing Republicans; the vast majority of those who defend status quo politicians and policies are not benefiting from them.

As of this month, income inequality has reached a point that's literally unprecedented in American history. 75% of the wealth is owned by the top 10% of the population, and 90% of it is owned by the top 0.1%. And according to the most recent poll (taken in January, before Hillary Clinton and Donald Trump alienated many in their parties), Republican membership is at 26% and Democratic membership is at 29%.

When you put those facts together, just how inconsistent the interests of American voters are compared to the people they're voting for becomes perfectly clear.

And the polls prove it. Though most Americans aren't informed enough about the TPP to oppose it, only 28% of voters think that free trade deals like it have had a positive impact on the economy. Around 60% want to replace Obamacare with a single-payer system. 61% think that upper income citizens pay too little taxes. 63% think wealth should be distributed more equally. And though those numbers show that not everyone who isn't part of the financial elite support a fair deal for themselves, a highly appropriate 78% want the obviously unfair Citizens United law overturned.

But it's that population of Americans that are hurting from economic inequality, and yet aren't willing to address it, that the ones at the top rely upon to keep their power. And I'm not just talking about the economically disadvantaged people who accept their own poverty as merely a side-effect of capitalism, which are very much in the minority and will soon no longer be a large enough part of the electorate to have much influence. The main focus of this article is on those who understand that the system needs to be reformed, and yet choose to support politicians that have no intention of reforming it.

According to those opinion polls I provided links to, almost 75% of Democrats favor single-payer, 83% want wealth to be more evenly distributed, and 75% think that the rich pay too little taxes. And though I couldn't find a poll showing how many of them oppose the TPP, the fact that Hillary Clinton has had to lie about her position on it should give us a clue.

It's for all the reasons above that I believe the Democrats will soon diminish as much or nearly as much as the Republicans.

For as long as the party has existed in its modern, neoliberal form, its largely liberal base have accepted it as simply their only option. That is not going to last forever. As I've said in other articles, Democratic identification has been steadily decreasing since the start of Obama's first term, clearly for the reason that more people have become unsatisfied with he and the rest of the party elite's non-progressive method of "progress." In contrast, by the end of Bill Clinton's second term, Democrats were the most popular party by far.

The reason Obama wasn't able to sustain his party while using the same faux-liberalism and excuses for his failures that Clinton used can be easily explained: Americans no longer want excuses. As they see their living standards continue to decrease because of the almost consistently elitist actions of corporate politicians from both parties, it becomes harder and harder for them to put up with tired explanations like "we had to compromise" or "you don't have any alternative."

Soon the problems of inequality, lost jobs, lack of social services, and climate change will loom too large for voters to ignore, not even the ones who supported Hillary Clinton in the primaries and still see their party as a force for good. In time they will abandon it and its excuses for avoiding change, simply out of self-preservation.

As Bagman says, we are seeing a realignment. At the end of the article, he predicts that as time goes on, the more affluent Democrats will pivot towards the Republican Party. When adding what I've mentioned, it seems like this migration will take place as the Democratic Party diminishes to irrelevance, giving the upper-class minority a new political perch to try to promote their agenda. But after that, the Republicans will of course be overtaken by a populist third party, most likely the Greens.

If you think that's too much to assume, keep in mind that the "Demexit" has indeed only begun.
Posted by Rainer Shea at 6:13 PM