100 Days In The Political Wilderness 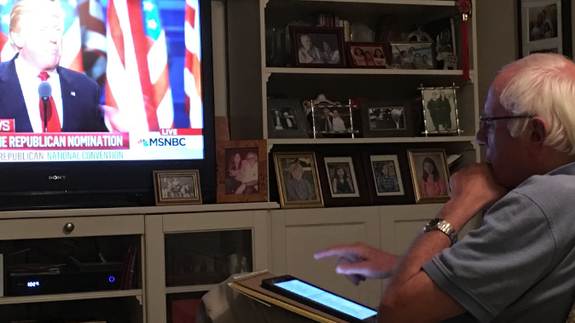 For most Americans, it's expected to be 100 days of agony. With Hillary Clinton as the Democratic nominee, it will most certainly be a race between two wealthy narcissists that are suspected to secretly be friends outside of politics.

In any other instance (except the 2000 election), whoever wins, we could try to take comfort in the old platitudes about this all being democracy in action, but not this year. Democracy in modern America, at least as we like to think of it, has proven to be an illusion, and it's time to rethink our approach to changing the system. The answer is clear to anyone who's serious about doing the political calculus: to walk away from the two dying, incurably corrupt parties and rally around a third one which truly cares about the people and the planet.

We can do that this year.

This has been the most bizarre election in recent memory. Every time it seems like situation has played itself out, a new twist has appeared. And the twists don't have to be over.

The news of this (potential) twist came today from Michael Sparks, the author of the obscure but phenomenal political blog theintependentthinker.com. In today's address in text form, he announced that given the right circumstances, Bernie Sanders will be willing to join the Green Party's presidential ticket and, against expectations, turn everything around.

You can read Spark's eloquently stated case in full, but here's a quote from it that explains most of what he's saying:


If Stein continues to surge then Trump’s lead over Clinton will continue to widen and ultimately become insurmountable.
If this happens, Sanders will have little choice but to accept Jill’s invitation to take over as the Green Party nominee.
Remember how torn Sanders was a year ago, when he was considering his presidential run?
Right now, Sanders is in the exact same place.

When I read that, I knew I needed to place the mission of this blog on hold.

My fellow revolutionaries, I present to you a short story titled "100 Days In The Political Wilderness."

As Robert Reich said, politics abhors a vacuum, and that void gets filled a lot quicker than many expected it would.

The wild turnaround starts when the Green Party's Jill Stein gets a dramatic bump in national polls, going from 5% at the end of July to within striking distance of that fateful 15% mark. With a few weeks left until the first presidential debate on September 26, the Democratic establishment officially goes on the offensive, with the corporate media publishing unfair attack pieces on Stein every day and the Clinton campaign constantly warning people about splitting the vote in a way that favors Donald Trump.

Trump, meanwhile, is seeing his lead continue to grow mostly by default, giving the fears of his victory more legitimacy every day. But there are more than enough "Never Hillary" former Sanders supporters to push Stein above the threshold, and by mid September, she's surpassed the Liberitarian Party's Gary Johnson and looks looks she'll participate in the debates. And Hillary, of course, is now struggling, with a gap behind Trump of over 5% that isn't too far from growing past 10%.

That's where Bernie comes in.

Whatever some of his more bitter supporters thought, Sanders is a good man with principles, and he only endorsed Clinton because he rightly believed that Trump was too big a threat to the same kind of poor, vulnerable people his family was when he was growing up. He can't stand by and keep trying to prop up the doomed Hillary Clinton. He finally accepts Jill Stein's invitation to become the Green Party's presidential nominee.

And in this case, the math is in his favor. After destroying both Trump and Clinton in the first debate, his poll numbers rise astronomically, largely thanks to the more than 45% of Americans who belong to neither (now somewhat) major party.

By late October, it's clear who the real winner will be. He takes the presidency by a relatively close but impressive margin, and in his acceptance speech, he feels the need to echo what Obama said eight years ago: it's been a long time coming, but change has come.

That scenario is next to unbelievable, but so are a lot of other things that have happened in the past year. As of today, I will no longer be posting in this blog or its Facebook page about the distant 2020 election until it's clear that either Trump or Clinton will win. Instead I and many others will devote all of my energy into helping Jill Stein, and though I acknowledge that what I'm proposing is a gamble, it's a gamble that's worthwhile.

Can you imagine what it would be like to turn this thing around, to defy every discouraging affirmation that Hillary and friends have tried to have you believe and take control for yourselves? Of course you can imagine that. Such a future is right in front of us, and all we need to do is go after it like we're serious. If our mission fails, our backup plan is implied in the name of this blog, but like the last Bernie Sanders campaign we attempted to make successful it's worth a shot.

Answer me honestly this time: are you ready for a radical idea?
Posted by Rainer Shea at 3:00 PM