The U.S. masses are harmed by capitalism far more than they benefit from imperialism 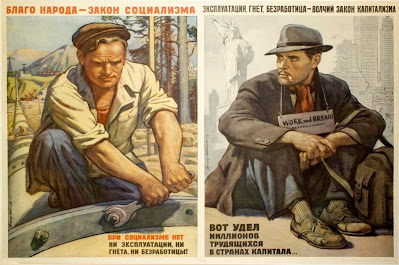 Castro wrote that “The duty of every revolutionary is to make revolution. It is known that the revolution will triumph in America and throughout the world, but it is not for revolutionaries to sit in the doorways of their houses waiting for the corpse of imperialism to pass by.” For those of us in the core of imperialism, this means taking responsibility for the direction that history takes. We can’t act like the unique challenges we face as revolutionaries in the core aren’t possible for us to overcome until the system totally falls apart.

When you’ve lived your entire life under the kind of iron grip which capital has within the imperial center, where the ruling oligarchs wield total control over our sham “democracy” and virtually all organized opposition to capitalism has been co-opted or suppressed, simply sitting back and waiting for the system to sufficiently weaken before taking action feels like your only option. But you have the option to tangibly weaken the capitalist state now. Because “taking action” doesn’t have to mean premature adventurist violence, it can mean training your cadre, studying theory, building ties to your community, and the other steps that the current conditions call for. The deterioration of conditions under capitalism doesn’t necessarily entail an increase in proletarian power, the proletariat will only gain power if we actively build the structures that can carry out revolution.

Without that work among the proletarian revolution’s members, all that will come from the deterioration of our conditions is more misery, which by default means a strengthening of the forces of reaction. In Ukraine, the collapse of a functioning state that’s unfolded since the 2014 U.S. coup has brought not a strengthening of the country’s communist movement (which has been successfully suppressed), but a strengthening of the fascist CIA-backed militias. The neo-Nazis have been able to fill the power vacuum amid economic ruin and a breakdown in essential services, exercising violence against Jews, Romas, and political opponents with impunity. And the militias have acted in unison with the Kiev government, which has treated them either neutrally or favorably due to their representing the interests of Kiev’s imperialist puppeteers.

As the U.S. descends into failed state status, the equivalent is happening here. The pandemic and the dire socioeconomic situation have eroded trust in U.S. institutions, as they should. But in places like Shasta County, California, where a militia-aligned group is on track to utterly take over local politics, this is bringing not greater worker power but a rise to power by fascists. The next step is a scenario where the Proud Boys, the Three Percenters, the Oath Keepers, and the other armed U.S. fascist groups begin exercising direct jurisdiction over localities, rather than merely electing politicians that represent them. Under capitalism, especially the settler-colonial kind of capitalism the U.S. is characterized by, destabilization means a more dangerous situation for marginalized groups so long as a strong revolutionary network is lacking.

This is why we need to be doing the kinds of things the Black Panthers successfully did, despite them having been in operation during U.S. imperialism’s strongest era. They fed their communities, provided them with medical and child protective resources, and kept people safe from racist attacks. If we do the equivalent of these things, fitted to our own time and to the demographics of our own communities, we’ll gain the credibility among the masses needed for uniting against the forces of reaction. We can’t be apathetic because we live in the core. The steps towards revolution within the core are already in motion, and are connected to the steps towards revolution within the imperial periphery.

They’re connected because capital is connected, because when capital is defeated in one place this brings the entire globe closer to revolution. In an imperialist country, capital can’t survive without extracting from the exploited countries, and in the exploited countries capital can’t survive without the core to prop up the decrepit neo-colonial regimes. The latter part is forgotten by those in the dogmatic Marxist strain known as the Maoist Third Worldists, many of whom argue that revolution can’t possibly happen in the core until it happens throughout the periphery. They claim this, explicitly or not, because their argument is based upon the belief that the workers in the core countries are either not majority-exploited or not exploited in any number. This is an utterly undialectical argument, especially in the modern era where neoliberalism has been consistently intensifying the exploitation of the core’s workers for half a century.

The labor aristocracy within the core has been shrinking for the last five decades, and now around 50% of U.S. workers pull in the poverty income level of 35 thousand dollars a year or less. That’s around 16 dollars an hour, a poverty wage even among those who make the full 16. And among the high income earners of those who make 100 thousand dollars a year or more, a third are now living paycheck to paycheck. These numbers are so wildly far removed from the amount of wealth that U.S. workers would need to get back for their income to be proportionate to their working hours (which have been steadily rising during the neoliberal era), Maoism Third Worldism is now detached from material reality to an absurd degree. As if it was ever not detached from reality in the first place; were all of those people the Panthers successfully educated on revolutionary theory fake proletarians, labor aristocrats who decided to become studied communists out of casual intellectual curiosity? They were prompted by their conditions to become radicalized, as are the millions of today’s U.S. workers who are getting radicalized to engage in expanding labor struggles.

Anyone who argues there’s no proletariat in the imperial center in this day and age is doing the propaganda work of the rightists, who claim that poverty in America has effectively been eliminated and that income inequality isn’t worth worrying about because of this. Those in the core may be well off by global standards, but this fact isn’t helping out the 75% of Kroger workers who are underfed or the 40% of unsheltered people who have jobs. Nor the rest of U.S. capitalism’s victims, who are increasingly being pushed out of even being able to have employment. Saying “there are others who are worse off than you” does nothing to change people’s circumstances of being exploited and otherwise economically marginalized. I dare anyone who argues this way, whether they’re an ultra-leftist or a right-winger, to say this to someone in the ghetto and see what kind of reaction this statement produces.

To engage in dialectical materialism, one needs to scientifically analyze one’s conditions, rather than let one’s analysis be influenced by idealist concepts. And when we reject the idealistic idea that the workers in the core are all actually bourgeois, or at least too privileged to have the capacity for mass revolutionary consciousness, we get a picture of a society that’s increasingly favorable towards revolution. Such ideological idealism ironically breeds emotional cynicism, cynicism of the most unproductive and tiresome kind. When people’s conditions change, as they have drastically for most people in the core during the last fifty years, they can become far more likely to be receptive towards revolutionary theory. People’s environments, their lived experiences, are what plant the seeds for the ideologies that they embrace. In our current situation where even many of the “high income” workers are getting pushed into objectively miserable conditions, the masses are growing ever more ripe for education on dialectics.

And this ripening of the masses will continue, regardless of the fact that U.S. citizens continue to see material benefits from imperialism. For ever more people in the core, these benefits are incredibly minor parts of their lives, not anywhere substantial enough to overshadow the amount of misery which capitalism subjects them to. To write the U.S. masses off as labor aristocrats as a whole because some of them still are labor aristocrats is counterrevolutionary. It’s our duty to the growing victims of capitalism in the core, and to the billions of people in the peripheries who capitalism victimizes on an even more severe level, to put in the work towards revolution. If we don’t, the corpse of imperialism will be supplanted not by a post-colonial socialist federation, but by a fascist failed state which lets fascist militias terrorize the masses like they do in Ukraine.

If you appreciate my work, I hope you become a one-time or regular donor to my Patreon account. Like most of us, I’m feeling the economic pinch during late-stage capitalism, and I need money to keep fighting for a new system that works for all of us. Go to my Patreon here.