Dear Deep State: We're Not Going To Let You Lead Us Into War This Time 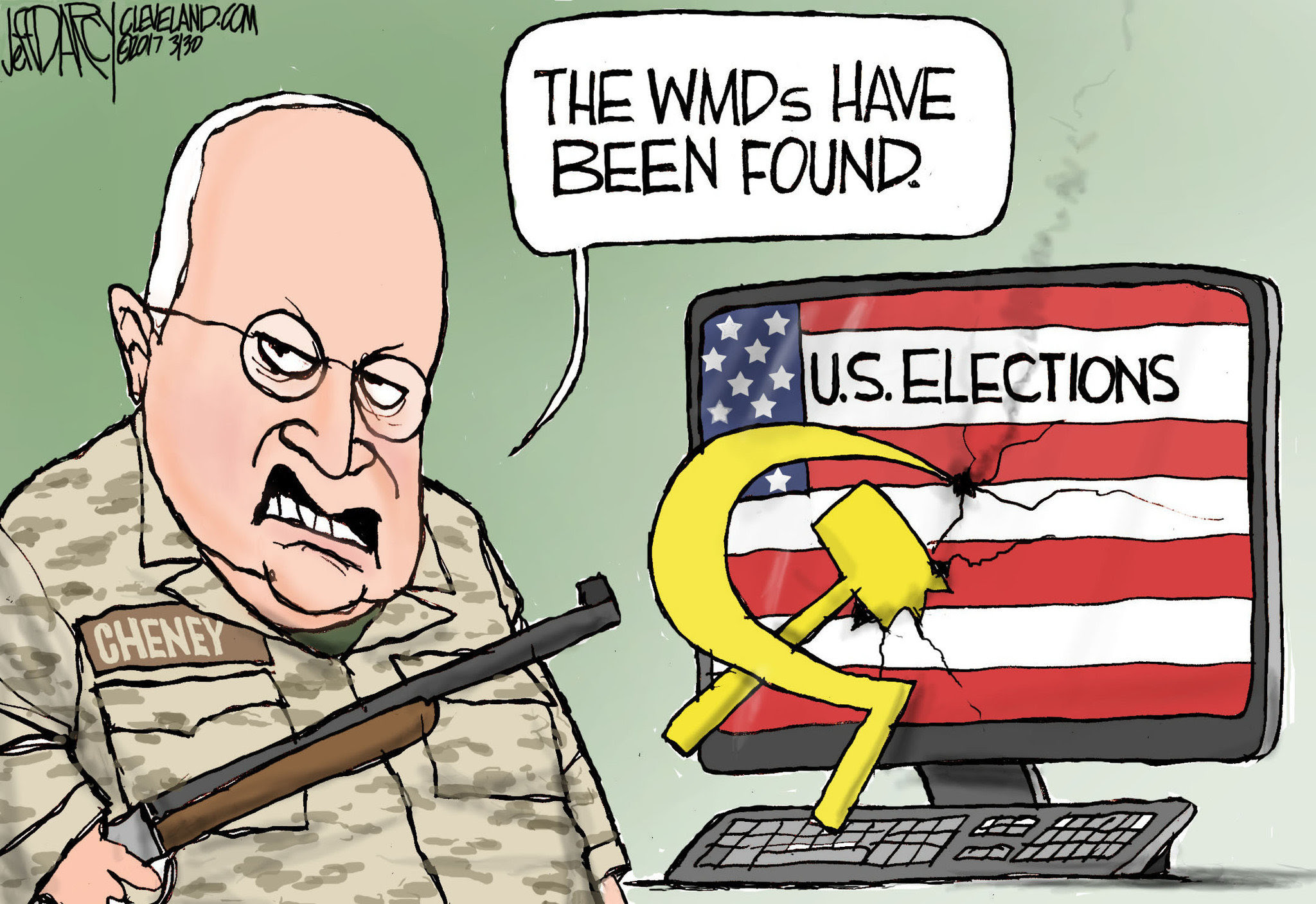 On April 6, when the newly military and intelligence establishment-assimilated President Trump attacked Syria with Tomahawk missiles in response to a chemical attack from two days earlier that Assad had allegedly orchestrated, everyone aware of the U.S. military empire's ghastly dynamics no doubt got that feeling again.

We got the sense that yes, once again, the war profiteers are going to get away with it. Yes, the primary operators of the nation's news sources will once again bombard their unwitting audience with war propaganda ranging from the blatant to the subliminal. Yes, the oil and weapons industries will once again get their donation receptacles in both parties to perpetrate attacks on ignored and/or scapegoated middle eastern communities while the feedback loop of endless counterinsurgency wars gets further perpetuated. Yes, staggering amounts of resources and lives will once again be wasted to increase the profits of corporations and increase support for the political establishment, and yes, the majority of Americans will once again believe the claim that this is all about humanitarianism or freedom.

This time it's an especially reasonable assumption to make. Since the last time we went through all the war motions in 2003, the Deep State (oops, I used the forbidden phrase) has greatly expanded its already formidable propaganda machine. The vast majority of the media we consume has become owned by 15 billionaires as just 6 companies control 90% of said media; George W. Bush admitted in 2005 that the U.S. government quietly produces videos meant for the use of news outlets; in 2013, a 1948 law was repealed which restrained the U.S. government from implementing "psy ops" to manipulate public sentiment in America and in foreign countries; and the final presidential Christmas present Obama gave to America was the creation of a program designed to suppress non-state approved ideas. If you're shocked you've never heard about any of that, well, don't be.

Under this environment, the Deep State's task of instigating war with Russia-for which the Syrian conflict is just a stepping stone to-seems beyond easy. The only reason said war's chief proponents have so far revealed their intentions merely in dark hints is that they know doing so now would rightly make them seem ludicrous, and the time will come when they can openly roll out an agenda of full-on combat with Russia. I expect the moment of shock and awe 2.0 will come after a major terrorist attack against the United States inevitably happens-an attack which the Deep State will easily be able to pin on Russia no matter who's responsible for it.

Yep, this outcome is so likely that even the Russian government, afraid as it clearly is of war with the U.S, has been preparing to defend itself from the coming onslaught of American military might since Trump's Syria strikes. I guess all we can do now is share anti-war memes on our Facebook timelines, watch Doctor Strangelove to save our ability to laugh when the inevitable occurs, and hope this next American war doesn't get quite so out of hand that it's the last one.

Or at least that's the way it's going to happen on paper.

It turns out that while the oligarchy has done an impressive job of consolidating and empowering its mechanisms to influence people's minds since 2003, the people themselves have gained abilities to counter the establishment's propaganda that more than compensate. I'm of course talking about the internet, which has gained more than a hundred million users in the U.S. since 2003 along with the revolutionary idea sharing tool of social media. Also, due in part to the mainstream media's shamefully power serving behavior in the run up to the Iraq War, trust in the corporate news outlets is now a qualifiably fringe phenomenon while reliance on independent news sources has relatively exploded.

Okay, some are no doubt thinking, now we have more gadgets. How's that going to stop a war machine that's been going strong for two hundred years? To prove the power of the internet in the year 2017, I'll review an overlooked chapter in that saga of McCarthyite war propaganda Russiagate: following half a year of constant assertions from Russian war propagandists, based on no evidence, that Putin's hackers gave WikiLeaks the DNC emails, a January 2017 poll came out showing over 60% of Americans were falling for this objectively implausible claim.

And then, after I and other independent journalists, particularly the fantastic Glenn Greenwald, frequently spread the fact that the proof for Russian hacking simply isn't there, a poll came out in March saying just 50% of Americans believed the claims. Happy epilogue: given how the corporate media has mostly given up on Russiagate since April 6, a poll for that issue from this month would likely show a solid minority of Americans are buying that Russia was behind the leaks.

That's right, through typing away at keyboards, we've been able to convince possibly tens of millions of Americans not to side with the establishment on an issue that (formerly) represented the main case for going to war with Russia. And the fact that the argument for war has consequentially shifted to the similarly dubious claim of Putin having known about the April 4 chemical attack in advance shouldn't daunt us a bit; we clearly have the ability to dramatically swing public opinion away from the Deep State's favor.

Okay, now The New York Times doesn't need to acknowledge a claim is false for the majority of Americans to do so. How's that going to stop an oligarchy whose war plans clearly don't hinge on what the public thinks? The war's supporters within the government, after all, won't have to worry about their unpopular actions getting them voted out if they can eliminate democracy itself-something they'll very easily be able to do when the mentioned terrorist attack occurs. Well expect it or not, here's where it gets really encouraging.

The amazing Caitlin Johnstone illustrated what I mean in her March 22 rhetorical expose of the Deep State:


Not that long ago, the ruling class dominated their subjects by simply forbidding dissent on pain of torture and death. The trouble with this was that it invariably led to public resentment, which expends a lot of energy and runs the risk of winding up on the business end of a guillotine blade. The great Noam Chomsky once wrote that the smart way to keep people passive and obedient is to strictly limit the spectrum of acceptable opinion, but allow very lively debate within that spectrum, and that is exactly what has happened. The proles are given the illusion that they have every freedom within reason, while their opinions are being deliberately manipulated every single day and their spectrum of acceptable ideas is being artificially limited. This has created a very energy efficient system of domination, where all new income can be funneled to the plutocrats who rule the nation while the unwashed masses who turn the gears of their machine slowly choke to death under the burden of the Walmart economy.

Luckily the internet is rapidly expanding the available spectrum of public opinion, and the ruling elites cannot shut it down without forever shattering the energy efficient illusion of freedom that they’ve worked so hard to establish.

So there you go. If the Russian war's proponents try to keep up their charade of democracy, the people will exploit the loopholes for dissent that this method has and stage a internet and alternative media-aided revolution. If the oligarchy decides to clamp down and outlaw freedom of expression, an ultimately similar kind of revolt will ensue. Either way the Deep State's hopes for an extended or even existing war with Russia are doomed to failure. And as Johnstone has also illustrated, given the  overwhelming opposition towards military conflict among members of the armed forces and Americans in general, the idea of people simply refusing to go along with the ruling class' orders to fight is already looking within reach.

For now, keep up those social media posts about things like the laughable absurdity of the official narrative on last month's Syrian chemical attack. Keep donating to causes like Tulsi Gabbard's campaign for peace. It's seemingly little things like these that could very well spoil the oligarchy's plans for war with Russia, not to mention take down the oligarchy altogether.
Posted by Rainer Shea at 4:37 PM