We Will Never Get Over It 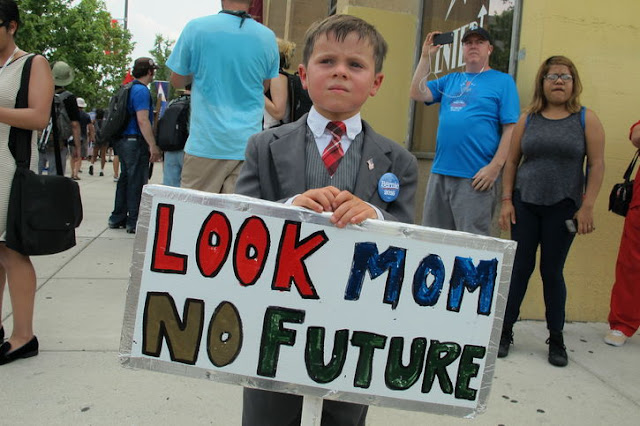 Establishment Democrats, I've got some bad news: Bernie Sanders supporters will never get over what happened last year.

Since the end of the primaries, in every way and from every level of rank within the Clinton cabal, we've been told that we need to quit whining and get behind the camp that won. And no matter that I ultimately obeyed them to an extent by advocating for voting for Hillary Clinton in swing states and Jill Stein in non-swing states; in all other respects, I haven't conceded to the Democratic establishment an inch. And neither have virtually all other Sandersists, with nearly half of Democrats, most of whom are no doubt Sanders supporters, now not feeling represented by their party. The fact that the neoliberal Democrats narrowly win the title of the lesser evil doesn't entitle them to the loyalty or even respect of me and the other Sanders supporters, and in this piece I'm going to articulate why this is the case.

There are probably countless good reasons for Sanders supporters not to align themselves with the Democratic establishment. The incredible condescension and hostility that was directed towards us by Hillary Clinton's many allies in the press; the DNC's attempts to undermine our candidate; the saga of ways corporate Democrats have undermined our agenda throughout not just the 2016 primaries but for the last several decades. But out of them all, there are two that work as conclusive deal-breakers.

The first one is the rigging that took place in the primaries. This issue has been ignored and dismissed so much by the corporate media that even many Sanders supporters themselves don't seem to be aware of it, but it's very real. What I'm talking about is the fact that even with the efforts from the DNC and the major media to hurt Sanders' campaign, he would have won the primaries in a landslide were it not for the efforts from overzealous pro-Clinton state party and state government officials to directly rig the primary contests in favor of their candidate.

Consider the following scenario: it's the beginning of February in 2016, and Bernie Sanders has just narrowly defeated Hilary Clinton in the Iowa caucuses. In this alternate reality, the Iowa Democratic Party hasn't very likely stolen the contest from Sanders through a series of autocratic "re-staged" vote counts, arbitrary coin flips, and then a strange refusal to disclose the exact vote count. As result Sanders, who was only around twelve points behind before the Iowa vote, quickly jumps to a near tie with Clinton in an average of polls. After he's also won the contests in New Hampshire and Nevada (the latter of which hasn't been slanted towards Clinton by the backroom deals of Harry Reid in this scenario) Sanders is narrowly in the lead.

The only thing that saves Clinton in this scenario from early obliteration are her large victories in all of the southern states, the contests of which were all scheduled for the first half of March. But Sanders manages to keep the race very close during this period through his substantial victories in Massachusetts, Oklahoma, Michigan, and Missouri (all of which haven't experienced statistically impossible vote model irregularities in this reality). After that, it's almost all uphill for Sanders. While fairly far behind in pledged delegates and national polls following Clinton's many victories in the contests from March 1 to March 15, by the end of the month he's established a firm national lead and reduced his delegate deficit from the hundreds to the dozens. He's able to do this by winning every single state since the middle of March due to how, in this scenario, Arizona's March 22 contest wasn't fraught with massive voter suppression.

By the end of April, Sanders is both leading in every national poll and narrowly leading in pledged delegates because the New York Democratic primary wasn't mired with massive voter suppression and electoral fraud, and because his margin of victory in Rhode Island wasn't reduced by many instances of closed polling locations. By the end of May, Sanders is by far the frontrunner in national polls and pledged delegates, and is close to becoming the frontrunner in superdelegates, because in this scenario many of the polling places in Indiana weren't closed before the state's primary, the Nevada Democratic caucus wasn't run in a way which deliberately shut out dozens of Sanders delegates, and thousands of votes in the Kentucky and Oregon Democratic primaries weren't mysteriously lost. By the end of the primaries in June, Sanders is sure to be the nominee because the contests in Puerto Rico and California weren't very likely stolen from him through  staggering amounts of voter suppression. He then, as we all know, defeated Trump in an epic landslide.

For every Sanders supporter, the fact that this didn't take place because of the actions of the Democratic establishment is of course too awful to forgive. What's far worse for not just Sanders supporters but everyone else, though, and the second big reason we will never get over what happened last year, are the ultimate consequences of this subtle coup against Sanders.

There are numerous reasons clear to anyone who's paying attention to the dynamics at work in the world for why the theft of Sanders' presidency was a very bad move for the Democratic elite to make. There's the prospect we're facing under a Trump presidency of exponentially increased risk of terror attacks against the U.S. and the geopolitical catastrophes that those attacks are sure to set off, in contrast to the peaceful foreign policy future America would be entering into were Sanders allowed to become president. There's the prospect of the Trump administration staging a fascist takeover following those attacks in contrast to the era of benevolent government behavior that Sanders would create. But by far the worst thing that's coming about because of Sanders' so-called loss, as Caitlin Johnstone wrote right before the primaries ended, is the climatic effect of Sanders' absence from the White House:


Bernie Sanders is the only candidate who has placed mitigating climate change front and center of his platform. He is the only one whose policy is strong enough to save us, and the only one with a voting record that backs up his commitment to enacting it in full.

A vote for anyone else is a vote for the end of your species. If a few years from now, you can look your kids in the eye as they fight wars for water and run from one natural disaster to the next, if you can look them in the eye and tell them “I voted for this, I put saving some billionaire’s share portfolio ahead of your health and safety,” then go right ahead. Your choice. Our children may be fighting for their lives in exactly the same way, but at least my conscience will be clear.

It will be bitter consolation, though. I’d rather them be thriving together in a new age of peace and safety than me having the grim satisfaction of an empty “I told you so.”

Well, that's not necessarily going to be the case. Even as the earth's average temperature drifts very close to the dangerous two-degrees-above-the-pre-industrial-average mark, there's hope yet for the climate as the majority of Americans who acknowledge climate change work feverishly to transform our energy system through for now purely bottom-up activism. And while we can't do much to stop the geopolitical crises that the Trump administration is on track for creating, we can stop its coming attacks on democracy if we play our cards right. Indeed, the people themselves have just as much or more potential than a President Sanders would have to set history on a new course. And Caitlin Johnstone herself, in spite of the fatalistic tone of the article above, believes this.

Still, while Bernie's revolution could very well bring about massive amounts of change to the world in these next few years, grievous harm is also likely to be done as a result of what the Democratic establishment did last year. As John Sanbonmatsu wrote days before the pivotal 2016 New York primary: "This is not a normal election year. It’s the end game. It is a crisis, in the original sense of the ancient Greek word, krisis — the turning point in an illness when a patient either dies, or recovers. Except that the patient, in this case, is both the American body politic and the living earth itself." And in the coming years, it will become clear which choice establishment Democrats made when faced with that crossroads, along with why we will never get over it.
Posted by Rainer Shea at 9:12 PM