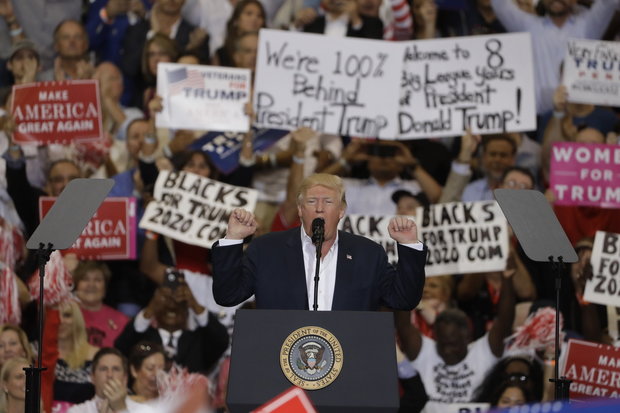 Like most every other disaster throughout history, it seemed like a good idea at the time. The Democratic elite had just committed perhaps the worst affront to democracy this country has ever seen by stealing the presidency from Bernie Sanders, and the Sanders supporters, who'd grown more than numerous enough to decide the election, were largely convinced that if Clinton could do this and get away with it, she could no longer claim the title of the lesser evil. Indeed, the rigging of the 2016 Democratic primaries, and the disturbing McCarthyite tactics that establishment Democrats launched after this rigging was revealed, have made it so that I personally find Hillary and Friends just as frightening as the Trump regime.


A big mistake many of my fellow anti-Clintonist progressives made, though, was becoming so eager to get rid of Clinton that they'd taken to talking down the threat of the alternative. "As bad as Trump is," wrote the otherwise always spot-on leftist blogger Michael E Sparks in his breakup letter to the Democratic Party, "he would just spin his wheels for four years. Both Republicans and Democrats would vote down everything he tried to do. The insiders hate him. He has no government experience. He can’t navigate it. He would just be a four-year Jon Stewart punchline." Those exact sentiments were expressed by a great deal of other former Sanders supporters, me included; how bad could Trump really be, we reasoned, given the facts mentioned above?

I'll get to exactly why this view of Trump is not accurate in a second, but the reason I think so many on the anti-Clinton left dismissed the notion that Trump posed much of a threat had to do with something I call the Tea Party Fantasy. When Trump got in, a lot of progressives believed, the left would do in 2017 what the right did in 2009 and easily overwhelm the new regime, along with the establishment of one of the major parties, with a years-long festival of grassroots political action. And so far things have for the most part lived up those expectations, with the fierce progressive backlash having likely ruined the GOP's hopes of repealing or even reforming Obamacare while the power structure of the neoliberal Democrats gets chipped away at more and more every month. At this rate, you'd think, by the time the Tea Party of the left is finished, Trump and Friends will be pretty much irrelevant as president-elect Bernie Sanders prepares to take office as the leader of the now corporatism-free Democratic Party.

The hard truth, though, is that our task is far bigger than staging an inverse repeat of the Tea Party. Because this is not 2009, and Donald Trump is not Barack Obama.

Consider these words, as written by the staunch anti-Clinton leftist Chris Hedges shortly after the election:

We await the crisis. It could be economic. It could be a terrorist attack within the United States. It could be widespread devastation caused by global warming. It could be nationwide unrest as the death spiral of the American empire intensifies. It could be another defeat in our endless and futile wars. The crisis is coming. And when it arrives it will be seized upon by the corporate state, nominally led by a clueless real estate developer, to impose martial law and formalize the end of American democracy.

When we look back on this sad, pathetic period in American history we will ask the questions all who have slid into despotism ask. Why were we asleep? How did we allow this to happen? Why didn’t we see it coming? Why didn’t we resist?

The specter he anticipates is one that anyone can objectively see coming, but that many of my fellow left-wing opponents of the Democratic establishment still refuse to acknowledge can happen because of their attachment to the Tea Party Fantasy: during Trump's term, perhaps sometime very soon, there will inevitably be a major crisis, most likely, I think, in the form of a terrorist attack. And as we saw almost sixteen years ago with the case of the dystopia portrayed in Michael Moore's Fahrenheit 9/11, such an event can easily lead to extremely violent and authoritarian behavior on the part of the government. Especially when that government is headed by the likes of the Bush or Trump administrations.

And seeing as the Bush team looks warm and fuzzy compared to the current regime, this time the aftermath of the attack will no doubt be horrifying on a level that Americans have never been forced to confront. Trump himself may not be competent enough to create an autocracy, and he and his administration may be for now reviled by the vast majority of Americans including most in Congress, the Senate, the media, and the Deep State, but terrorist attacks have ways of shaking things up. Immediately after this event, Trump's approval ratings will no doubt go way, way up merely because of his position as the commander of a nation in crisis, and frazzled as he'll be, his far smarter and ideologically committed top aides will see to it that he wastes no time in taking some very big actions. As most of the House, the Senate, the press, and the public becomes compliant towards the president, his egoistic and domineering personality will partner with the terrifying cunning of behind-the-throne rulers like Mike Pence and Steve Bannon to bring about an exponential expansion of executive power and the irrelevance of laws saying that power can be challenged. And by the time the following period of wild military ventures, mass arrests of any perceived dissenters, and expanded corporate power makes most people again turn against the regime, it will be too late. As Chris Hedges says, the pretense of democracy will be ended, and fighting back will be virtually impossible.

No, Trump is not 2017's equivalent of 2009 Obama. The latter, like the Democratic Party, was prone to tepid liberal moderation and capitulation towards his political opponents, something Trump and Friends are the antithesis of. And the supporters of this president are driven not by the reassuring fuzziness of "hope and change" but by bitterly paranoid hatred and fear. Even before the coming 9/11 event, these facts have been chillingly demonstrated on multiple occasions, such as that of the victory salute a prominent group of neo-Nazis gave for Trump in November which provoked a disturbingly tepid response from the Trump team, and the Trump rally last month that a witness describes as having included a "horrifying" amount of zeal, nationalism, and "demonic activity."

Trump's administration may look like the politically fragile product of a "straw man" candidacy whose power is severely limited by the government's checks and balances, but as will soon be made apparent to all, it's a fascist time bomb that will go off as soon as the next big attack happens. It has a powerful enough movement behind it, it has a path to greatly increased influence, and all it has to do is wait. Michael Sparks himself seems to suspect it, having lately taken to comparing Trump with Hitler. And more than ever, he has some good reasons to justify doing so, what with the Trump administration having recently signed an executive order that in many ways dismantles various aspects of government, including the state, educational, and justice departments, so as to consolidate authority to the executive branch.

So what do we do? The bad news is that in many ways, the opportunity to avoid the course towards this insane future ended when Bernie Sanders was cheated out of the nomination. The good news is that to soften the fascist blow awaiting us, all we have to do is ramp up what we're already doing: getting involved in the political process.

We must firmly draw the line between the Sanders coalition's movement and the so-called resistance movement of the Democratic establishment, the latter of which, in addition to serving as a public relations tool for corporate Democrats, is run by people whose political brand makes them inherently unable to truly resist a fascist. We must talk to all of our generally non-political friends, relatives and neighbors about the gravity of the situation so as to make the percentage of Americans who have become more politically involved in the face of Trump go from its current 25% to more than twice that. We must redouble our commitment to donating to anti/Trump and/or anti-neoliberal Democrat organizations, participating in and/or organizing protests and strikes, signing petitions, contacting political leaders, and simply spreading information that increases awareness of the threat at hand. A good opportunity to do so is the "Berniecrats' Day of Action" that I'm organizing, which takes place on March 25, the one-year anniversary of the moment a bird so upliftingly visited Bernie Sanders at one of his rallies.

"Now is the time not to cooperate," writes Chris Hedges in his blueprint for revolt. "Now is the time to shut down the systems of power. Now is the time to resist. It is our last chance. The fanatics are moving with lightning speed. So should we." To do so will take more than following in the footsteps of the Tea Partiers; this will require the creation of a movement whose success has no parallel.
Posted by Rainer Shea at 8:50 PM