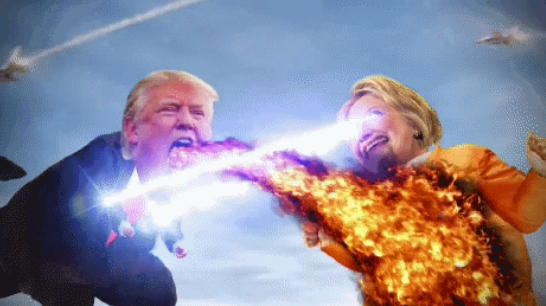 I've got some bad news: the 2016 election is still going on, and it will probably keep going on for a while. All that's changed since November 8 is that the contest now takes place in the general political realm instead of presidential politics. Trump and his team of proto-fascists continue to throw out absurd and dangerous disinformation so as to bend the fabric of publicly accepted reality to their liking. Sleazy corporatist "liberals" continue to use shaming, scapegoating, and failing all else outright lying so as to hold onto the little public support they still have. And as was also the case in 2016, the majority of Americans who aren't buying into the self-serving political brands of either of these two forces are in agony while trying to navigate the tedious and grotesque game that they've been forced into.

Like it or not, the fascists and the sleazebags are in almost full control of the political establishment right now, and before they're hopefully replaced in the following elections, all we can do is work to tie them down best we can. What complicates our hopes for doing so is that instead of being in one piece and thus easy to oppose, these two groups are in competition. This gets in the way of our ability to oppose them because in this situation, attacking them has become a double-edged sword.

Caitlin Johnstone explains this problem in a recent piece:


Every time I write an article suggesting that progressive rebels should focus on attacking the Dem establishment instead of Trump, I get a deluge of comments and messages saying “We can fight both! We can walk and chew gum at the same time!” No you can’t. You cannot do that. You will fail. You will fail because this is a media war, a war of perception, a war of narrative. It is impossible, in our current political climate, to feed into the “Trump is a monster” narrative without simultaneously feeding into the “any Democrat would be better” narrative, because the establishment Democrats are doing everything they can to use anti-Trump narratives to elevate themselves so that they can take back control of the government without espousing a real progressive agenda.

Going by that, it would seem that the solution is to simply focus on bringing down the corrupt Democratic cabal instead of feeding into its slyly self-elevating narrative about the monstrosity of Trump. But while I'm otherwise an enormous fan of the messages that Johnstone works seemingly every day to spread, I see some big flaws in the approach she's advocating. Namely that putting aside the Democrats' fear campaign, Trump absolutely should be feared.

Johnstone argues in her case for the counter-productiveness of revolting against Trump that while he and his cabinet are certainly very scary and power-hungry people, there's no danger they'll be able to circumvent the larger systems within our government's structure. "The Deep State goes very deep," she writes, "and the power structures entrenched therein are very old. The POTUS faces a long, hard, uphill slugfest of a battle in his attempts to restructure America’s power systems, and the majority in both parties openly or secretly hate him and his stated agendas."

She's partly right. What with said Deep State already being in full-on battle mode against Trump, I don't expect him to take very much control over it, even if he pounds away at its power structure every day for the next eight years. But that Deep State is mainly located within America's military and intelligence agencies, which can only contain Trump to an extent. Many other political facets exist which aren't so impervious to the influence of the president, and they alone may well be what enables his continued rise to power. While this will sound hard to believe, what I'm talking about is the Congress, the Senate, the governorships, the state legislatures, and the American public in general. Yes, the White House does have a way to expand its influence into these areas, and it runs through the last event that brought about an era of president-worship and grotesque nationalism in America: a major terrorist attack.

If and when the U.S. is attacked during Trump's term, the tables are going to be turned in his relationship with America's power structures. As the president, by default he'll become the main figure people will want to be loyal to amid a moment of great uncertainty and grief, and this will give him unparalleled power. With the newfound backing of the majority of the public, he'll easily be able to make the members of lesser elected offices, whether or not they hate him, go along with his agenda out of "national unity." It's then that Steve Bannon and the other terrifying Trump puppeteers will move in for the kill, suppressing dissent, going on reckless military ventures, and generally laying waste to the constitution and our democratic institutions. If you think I was led to believe this by the eager-to-fearmonger establishment Democrats at the Vox or The Washington Post, just look at what the avid Democratic Party critic Chris Hedges thinks about what will happen under this administration.

In short, Johnstone may be right for the moment in assessing that revolting against Trump is an act which feeds into the narrative of the larger threats at work, but that very likely won't be the case a year from now after circumstances allow him to take far more control. So returning to this article's main point, what's to be done about all this? Every time we attack Trump, we're inadvertently helping the Democrats. And every time we attack the Democrats, we're inadvertently helping Trump. The paradox that people like me find ourselves in when faced with this dynamic is maddening, and it's no doubt provoking a lot of us into hopelessness and apathy.

Rest assured, though, there is a solution. And it's as uplifting as it is simple: rather than spending all our effort on attacking our opponents, which, in spite of its partial importance, is ultimately an act which feeds into the revolution-strangling dynamic of the two-party system, we mainly try to build up alternatives. The hidden weakness in the system of mutually controlled opposition that the Trumpists and Clintonists have created is that ultimately, in spite of their over-emphasized differences, they serve the same interests. Which is to say the interests of the corporations and oligarchs that prop up both of them. If we can take away, for just one example, the ability of Goldman Sachs to lobby and donate to political candidates, Trump and the neoliberal Democrats, who are both deeply influenced by the bank in different ways, will lose massive amounts of money to run their campaigns and organizations. Then they'll be forced to rely on individual contributions from their ordinary supporters, who largely have far more positive desires than those of Goldman Sachs, or else be politically flattened by the dynamic small-dollar funding operations of the Berniecrats.

In this and many other respects, fighting the system of predatory capitalism is a highly effective way to kill these two big, ugly birds with one stone. Another is to advance leaders, organizations and ideas which represent our agenda. This approach may have proved ineffective when the 2016 election was in presidential campaign mode because of the deep institutional obstacles faced by Bernie Sanders and Jill Stein, but in this new political landscape, we have a lot more options. We can run candidates in state and local level races, where it's a lot harder for the neoliberal order to rig the game against us than was the case with the presidential election. We can build organizations and movements from outside of electoral politics, putting us in an excellent position to enact change where it matters: in the bottom-up. And we can force the political establishment to work in our interests by making clear to it, with strikes and boycotts and calls to political offices, that an uprising is coming if they don't start working for the people.

None of this is to say attacking the Trump administration and the Democratic establishment directly won't often be necessary. But if we can refrain from making it a central priority, and focus on ending the neoliberal status quo in general, their card house of controlled opposition will fall down.
Posted by Rainer Shea at 10:49 PM