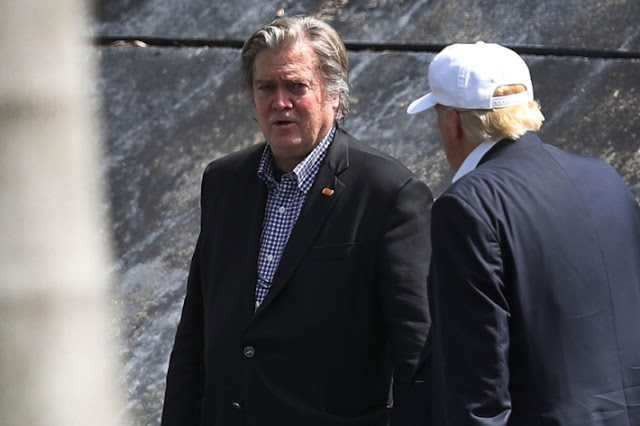 You've probably heard sometime recently about a book, published in 1935 by one Sinclair Lewis, titled It Can't Happen Here. It's a piece of political science fiction which tells of how Berzelius Windrip, a self-styled populist who turned out to be a corporatist dictator, won the 1936 Republican presidential nomination and defeated the incumbent Franklin Roosevelt on a wave of nationalism and contempt for the establishment. Thankfully, no one resembling Windrip appeared in the 1936 election, and Roosevelt would probably still have defeated them if they had because of how grateful the vast majority of Americans were for the New Deal. But especially after taking a good look at the events of this past month, it becomes clear that Lewis' prediction wasn't wrong; it was just eighty years off.

The first thirty days of the Trump administration, aside from some menacing statements from the president and his aides about the press being their enemy and a series of overreaching executive actions, have not quite been qualifiably fascist. But throughout these last few weeks, the president and/or his top aides have made some remarks which seem to very strongly imply they have an intention to take things much, much further. At one of his strange campaign-esque rallies today, Trump invoked the politically self-beneficial specter of a terrorist attack regardless of whether he was talking about a real event, having vaguely referred to a terrorist incident that happened "last night in Sweden."

Okay, you'd think. He said another ridiculous thing. Why make it into a provocative headline? Well, it's established a trend that Trump and Friends have developed of fabricating terrorism incidents for their own political leverage. Last month, as you know, the Counselor to the President Kellyanne Conway referred multiple times to a nonexistent "massacre" in Bowling Green, Kentucky that was perpetrated by foreign Muslims to use as an argument for the thankfully now independent court-blocked Muslim ban. Days later, Trump himself cited a wide series of unsubstantiated terror incidents that he said the media was covering up. And now we've seen a remarkably similar piece of rhetoric coming from the highest office.

One explanation for this bizarre pattern is that Conway's the kind of counselor that tells her patients to listen to rather than ignore the voices in their heads. Another is that Trump and his inner circle have privately decided that focusing on terror attacks, real or not, is a way to create political capital for themselves out of thin air.

To be clear, I'm not going to pander to any "false flag" suspicions in this piece. I don't believe the Trump administration is plotting a terrorist attack any more than I believe Bush was behind 9/11. But I do have some solid reasons to suspect the Trump administration would welcome, and is even preparing for, the enormous position of power they'll be given in the event of a major terror attack during their term.

We've all seen the ghastly political shock waves that terrorism tends to have. 9/11 brought about one of the darkest periods in American history for our country's constitutional and democratic values, allowing the Bush administration to create a surveillance state, violate human rights, and tear apart the middle east for profit all while the vast majority of Americans backed the president out of "national unity." Most recently, the 2015 ISIS bombings in Paris that killed 130 people let the French government declare a prolonged state of emergency which threatened the country's pretense of democracy. And in the Trump era, as Phil Torres writes today after referring to the president's Islamophobic rhetoric, attacks on the judiciary, and demonization of the media, we are in greater danger than ever of losing our democracy because of terrorism:


So the dominos are in place for a major, sudden constitutional crisis. What’s frightening about this unstable equilibrium is that another terrorist attack will almost certainly happen within the next four years, if not the next year or coming months. It’s not so much a matter of if but when this takes place, as terrorism scholars unanimously agree. And once this does happen, those who still believe in American democracy will need to be vigilant and proactive in defending the only branch of government [the independent courts] that currently stands between democracy and autocracy.

And so when I see Trump and his top aides regularly fabricating terrorism incidents to strengthen their case for the persecution of Muslims, the dangers of a free press, and the expansion of the executive branch's powers, I get the impression that they're scratching an itch they have, consciously or not, for the things a real terrorist attack would let them do. Indeed, many in Trump's cabinet are anticipating, with an unsettling amount of conviction, the event of a terror attack and/or civilizational war between America and the Muslims of the world. Michael Anton, Trump's senior director of strategic communications, apparently expects Islamic terrorists to attack the U.S. with a nuclear weapon "any day now." And Steve Bannon insists that in accordance with a dubious, cycle-based view of history wherein world conflict is scheduled to peak around every eighty years, an epic global war is sure to come very soon.

The irony of this is that as has been the case with the Islamic fundamentalists who believe they're on the verge of winning a coming apocalyptic war between good and evil, Trump, Bannon and the rest are beginning to realize their visions of turmoil and the end times regardless of whether these expectations are based purely on myth. And both of these forces are helping the others' similar aspirations be brought about, with the middle east power vacuum that Obama's unnecessary military involvement created now showing hints of being filled as members of the Islamic State hail the things they're gaining from Trump's anti-Muslim actions. And the Trump administration, obviously, is using the Muslim extremists to further its own ends of gaining partisan advantage, consolidating economic and political power, and the allegiance of the American people.

I almost can't blame Bannon for believing in the eighty-year cyclical view of history, because so many disasters that developed in the 1930's are repeating themselves now. But in this case, things are in many ways far worse than they were eight decades ago. Instead of just the Dust Bowl, there's a global and irreversible environmental catastrophe. The economic inequities and corporate control over society now surpass in magnitude the similarly plutocratic conditions of the early 21st century. In addition to a new Great Depression that's expected to hit this year, we now have an unprecedented coming era of natural resource scarcity to deal with. And as wasn't the case eighty years ago, the new rise of fascism has occurred in not just Europe but in the United States.

And as long as we're talking about parallels, here's one of the songs in praise of Windrip's regime from It Can't Happen Here, which I suspect will soon be a very accurate description of the state of the country:


Bring out the old-time musket,

Rouse up the old-time fire!

See, all the world is crumbling,

Dreadful and dark and dire.

The world to our heart's desire!