Don't Count On Establishment Democrats To Stand Up To Trump 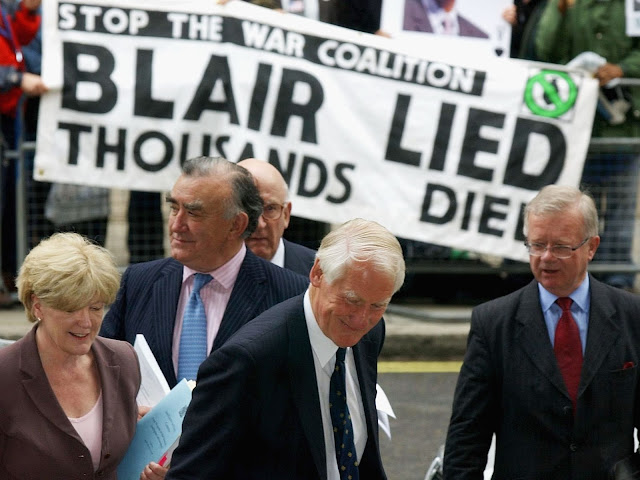 As 2017 gears up to quite possibly become the new 1933, the two thirds or so of Americans who oppose you-know-who are spending this bleak political winter doing their best to prepare for taking part in the massive resistance effort which is certain to bloom in the spring. But as history has shown us, a significant portion of that two thirds might not stay committed to the fight.

Before I continue, I'd like to make it clear that this piece is not intended as a means to divide Trump's opposition between the moderate and far left. While I hold no allegiance to the Democratic Party until fundamental changes are made to it, and I will under no circumstances embrace the neoliberal agenda that it currently represents, I know that in the context of resisting Trump, it's important to know that the enemy of your enemy is always (to an extent) your friend. The main way in which I'm about to attack the moderate left has do to with how it can't be relied upon to remain part of said resistance.

Enter the instance of what happened after 9/11. In the aftermath of the attacks, the Bush administration used the circumstances to go on a rampage, infringing on many constitutional liberties in the name of security and doing you-know-what in the middle east. What enabled the U.S. government's reign of terror, though, was not just the compliance of Republicans, which was to be expected, but the compliance of many liberals, namely the ones of the centrist persuasion.

Mainly among these "liberal" enablers of the administration were the ones in the House, the Senate, and much of the major media. Throughout the years following the attacks, far too often did most House and Senate Democrats vote in favor of Bush's proposals, such as when all but one Democratic Senator approved the Patriot Act and when enough of said Democrats supported the Iraq War for it to be able to pass. Others in this effort to unite the left and the right at whatever cost included those in charge of "liberal" publications like The New York Times and the "liberal" UK prime minister Tony Blair.

"I hold Blair more responsible for the Iraq War than I do George W. Bush," Michael Moore has said in a brutally honest assessment of the role that Blair and others like him played in this shameful affair. "Because I expected that of George W. Bush. That wasn't a surprise, all right. But Bush only got away with it because he had the cover of Tony Blair, because he had the cover of liberals, the liberal New York Times, the liberal New Yorker magazine, the 'liberal' Tony Blair."

Now enter the situation we're going to be in when Donald Trump is president. While I, like too many others, used to view the claims that Trump is a threat to the republic as alarmist, I've lately come to believe that image many have gotten of "Fuhrer Trump" has a lot of merit. While I have every reason to believe he'll govern in a relatively center-right, congress-restrained fashion at first, at a certain point I expect things to indeed get very scary. Namely, when a terrorist attack similar to that of 9/11 inevitably occurs, the only way one can realistically imagine the Trump administration reacting is with an amount of authoritarianism and reckless military action which may be unprecedented in the history of America's government.

Right after the crisis hits, Trump and his party will no doubt get an enormous boost in popularity, giving them a powerful political aura throughout the next several years which allows them to get away with a lot more corrupt and/or dangerous deeds than usual. Just how useful this aura turns out to be for them, however, depends on what his opponents do. And from everything we can tell, those in the moderate, corporatist wing of the Democratic Party will abandon their initial (supposed) effort to resist Trump right when the attacks occur.

Again, I make this prediction not because I want to provoke division within Trump's opposition due to the ideological differences I have with establishment Democrats, but because I have good reason to doubt said Democrats, who are unfortunately the main people in charge of the resistance movement, will share any parts of my cause after a certain point. If my prediction seems implausible now, just look at what these Democratic leaders did during the post-9/11 period of the Bush administration.

Take the case of Nancy Pelosi, the House minority leader who voted for and outspokenly supported the Patriot Act, the Bush tax cuts, and the Iraq War. She's also on record for stating that "We stand shoulder to shoulder with the president" when asked about how she viewed Bush's efforts to violate civil liberties. Chuck Schumer, the Senate minority leader, can be trusted even less than Pelosi to continue opposing Trump, having both supported the Bush policies mentioned above and having been named by the president-elect as more likable than the Republican leadership because of his articulated willingness to compromise. And given how the agenda of the rest of the Democratic Party's leadership generally matches up with the corporatist, militaristic views of these two, I suspect most other House and Senate Democrats will act similarly compliant to the wishes of the GOP.

In short, after these "liberals" have inadvertently helped Trump win with their embrace of the politically impotent Clintonist ideology, they're no doubt going to aide him in the second phase of his rise to power by capitulating to his agenda after the next 9/11 occurs. If progressives and anti-Trump conservatives want to weather the coming fascist storm, they'll rally around leaders who can't just be considered "liberals," but genuine advocates for systemic change.
Posted by Rainer Shea at 7:50 PM