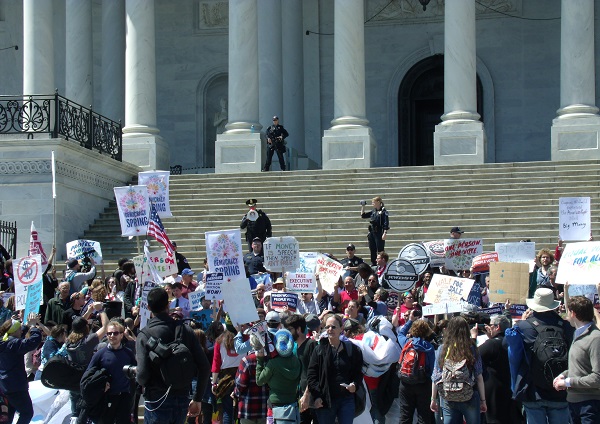 In my previous article, I argued that the differences between the two main factions of the political left are too dramatic for them to fully reconcile any time soon. However, to follow up with something encouraging after publishing that somewhat negative piece, I'll now make the case for something else that I believe will happen  throughout the next few years: the emergence of a left-wing backlash during Trump's term which will be more powerful than the right-wing backlash that occurred during Obama's term.

The latter movement, as we know, has made a serious impact on American political history. After the Democratic sweeps in 2006 and 2008, grassroots conservative activists-mainly the ones on the far right-wasted no time trying to regain their dominance over politics. In the months after Obama's inauguration, the political vacuum of right-wing populist anger that had appeared was filled by the Tea Party, Fox News demagogues like Glenn Beck, and far-right groups like the Oath Keepers.

And while the Tea Party peaked early in Obama's presidency, the former followers of it and lesser right-wing populist movements that appeared around that time have since enormously influenced government. Tea Partiers managed to get a considerable amount of their representatives elected in 2010, and later elected their ideological heir Donald Trump to the presidency. They've also turned the tables on the Democrats, with the Democratic Party now being in worse shape electorally than Republicans were in 2008.

This all would seem to vindicate the post-election celebrations of Trump supporters. But the hidden weakness in the political structure that the far right has built in the last eight years is that not that much of the electorate helped build it. Specifically, around 26% of Americans were involved in the construction.

"The full backlash wasn't really 47 percent," wrote Will Bunch in his 2010 book The Backlash: Right-Wing Radicals, High-Def Hucksters, And Paranoid Politics In The Age Of Obama, referring to the percentage of the vote that John McCain received in 2008. "As the first weeks of the Obama administration dragged into months, the parameters of the hard-core resistance emerged, with a figure that was attached to 26 percent, maybe less. These were the 26 percent of Americans, according to Newsweek, who still approved of George W. Bush in the waning days of his presidency; the 26 percent who in 2009 said they'd like to see Sarah Palin as Obama's successor in 2012, according to CBS; the 26 percent who reported to Fox News they were outraged when President Obama bowed to the Japanese emperor; the 26 percent who believed Obama's 2008 election was not legitimate, that the much ballyhooed antipoverty group ACORN had somehow swooped down and 'stolen' the contest by recruiting new voters in the heavily black and Latino communities."

In other words, left-wing populists outnumber right-wing populists by 2 to 1 at the least. And thus during the Trump era, I believe we are going to witness a backlash to the backlash which far surpasses the former one in its strength and impact.This belief of mine is supported by the fact that unlike was the case with the right-wing backlash just a month after Obama's 2008 election, the left-wing counterrevolution has already started.

Bernie Sanders has emerged in the weeks since the election as a dynamic figure in the effort to organize a progressive backlash, participating directly in the anti-oil pipeline protests in Standing Rock, North Dakota, calling for an overhaul of the Democratic Party's corporatist leadership, and holding public events that resemble his campaign rallies. He's just one of the many progressive leaders who have been working towards such a movement in the past month, among them Michael Moore, who's advocated for an anti-Trump resistance "that will dwarf Occupy Wall Street."

And if public opinion polls and the behavior of Americans so far after the election are any indication, he'll get one. In addition to all of this, donations to organizations that oppose Trump's agenda have surged, with the fundraising of the ACLU, for just one example, having gone up by 7000 percent within the first 24 hours after the election.

No, we are not. Throughout Trump's presidency, it's reasonable to assume that there will be a constant series of protests, victories in electoral politics, and pressure put upon political leaders on the part of the left. And as progressives build this new political structure, the quarter or so of the population that built the old one will not only be rendered largely apathetic due to Trump's reassuring presence, but will be shrinking due to an increase in millennial and nonwhite voters.

In short, whereas Donald Trump and the Tea Party took control of the American political steering wheel in the age of Obama, Bernie Sanders and whatever Occupy-esque movement that emerges during the coming years will do the same in the age of Trump. And in this case, I suspect, the new driver will retain their role as the defining force in politics for quite some time.

But this movement will not just be in opposition to the new president. It will be going up against every leader and institution which defends the current economic paradigm of predatory capitalism, the Democratic Party being no exception. Unless Democrats soon start genuinely representing their base, the New Backlash will most likely become centered around an alternative political organization that's capable of addressing their needs, be it the Green Party or something else.

Whichever party or individual becomes the leader of this movement, though, every factor points to its success. And by the time it's likely gained control of the government four years from now, those on the left will be the ones saying that they've taken their country back.

Progressives will have some big opportunities throughout the next four years. Let's get to work on taking full advantage of them.
Posted by Rainer Shea at 10:39 PM