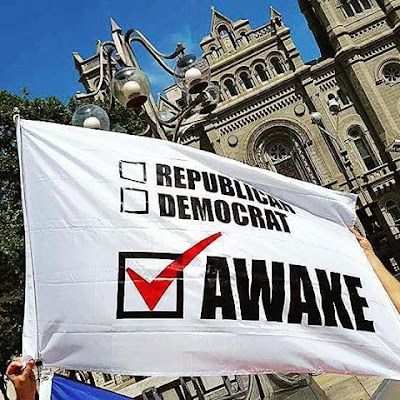 In a past article, I once made a (seemingly) shocking prediction: that in the near future, the combined number of people who affiliate with the Republican and Democratic parties will make up less than half of the electorate. The reasons I give for believing this duopoly-imperiling event is on its way have to do with the fact that according to a January Gallup poll, combined Democratic and Republican identification is at 55%, and because the events of this election have left so many people alienated with the two major parties, that percentage is bound to soon drop below fifty.

However, as I recently discovered, Gallup takes their party affiliation poll a lot more frequently than I assumed, and when I looked at the most recent survey (taken in September), to my dismay I found that the combined number of Democrats and Republicans had since gone up to 59%.

How could this be, I thought. Donald Trump and Hillary Clinton are the most disliked (and probably the easiest to dislike) presidential nominees in history. About half of both Republicans and Democrats wish that someone else were their party's nominee. Trump is driving evangelicals, women, and Latinos away from the Republican Party, while Clinton is alienating the most important part of the Democratic Party's base-progressives. These ideological rifts within the two major parties are just the latest and most dramatic in the massive decline of support that they've both been experiencing for the last several years, and there's evidently no reason to think that that trend will start to reverse. To say that Democratic and Republican membership has respectively went from 29 and 26 percent to 32 and 27 percent since the beginning of the year seems to defy all logic, or at least prove that Americans are far too intrenched in party loyalty for the two-party system to end anytime soon.

The current party affiliation polls notwithstanding, though, Democrats and Republicans are in just as bad shape as intuition would have it.

When looking at the long-term history of Gallup's party affiliation polls, one notices an intriguing phenomena: identification in the two major parties always reaches a high point around the time of presidential elections. In 2012, the poll that put independents at 33%-by far that year's lowest estimation of independents-was taken days before the election. In 2008, the poll that put independents at 32%-a notably low number for that year as well-was taken in late October. And in 2004, the two polls in a row that put independents at 27%-down from 40% at the beginning of the year-were taken in the weeks before Election Day. I know these examples are far from conclusive evidence, but they seem proof enough to me that as elections approach, people tend to coalesce around the party that they prefer will win.

Just as the support for third party candidates always drops approaching election day while many of their former backers get behind the major party candidate that they're the least dissatisfied with, the same appears to be true for party affiliation. This theory of mine seems to be further supported in how during the primary season this year, loyalty to the two major parties began to drop with Republicans making up 25% of the electorate in April and Democrats making up 28% of it in May. And since then, after things have switched into the next phase of the campaign, the polls have generally shown a higher amount of "support" for the Democratic and Republican parties. The lack of sincerity among many of the 59% of Americans who say they side with the two major parties is betrayed in how, at the same time, 57% of Americans say they think a third major party is needed.

And when the piece of partisan glue which is the 2016 election becomes irrelevant on November 9, there will be nothing to stop that 57% of the population from acting on their wishes and changing the party system.

After the election is over and the nation's partisanship has returned to a sane level, the majority of Americans who are dissatisfied with the major parties will have an opportunity to defy them. Regardless of whether Trump or Clinton wins, Trumpism and Clintonism will retain their control over the agendas of the Republican and Democratic parties throughout the foreseeable future, and that will not sit well with most Americans. The ideological split between traditional Republicans and those in Trump's camp will likely continue to grow, quite possibly resulting in a sudden success for the Liberitarian Party or something similar to it in future elections. Meanwhile, the divide on the Democratic side between those who embrace neoliberalism and those who want to fight it (which I think is hurting Democrats more than the right's ideological split is hurting Republicans) could very well result in the rise of a populist party like the Greens.

If you think such a shift isn't realistic, keep in mind that the main factor behind the current split within the two parties, wherein most of the Republican base now embraces Trumpism and most of the Democratic base now rejects Clintonism, is the now historic amount of economic inequality which has appeared because of the pro-big business policies that the Republican and Democratic establishments have supported for the past four decades. And as the trend of growing economic inopportunity continues throughout the next four years, with Obama's likely successor Hillary Clinton presiding over an ongoing assault on the middle class and a new financial crisis, populist sentiments on both the left and the right will only become more intense, making the creation of a four-party system by 2020 a serious possibility.

So in the meantime, Democratic and Republican insiders should enjoy the increased amount of support for their parties while they still can.
Posted by Rainer Shea at 9:43 PM