Reaganomics For The Left: Are Democrats Becoming The Party Of Tax Cuts For The Rich? 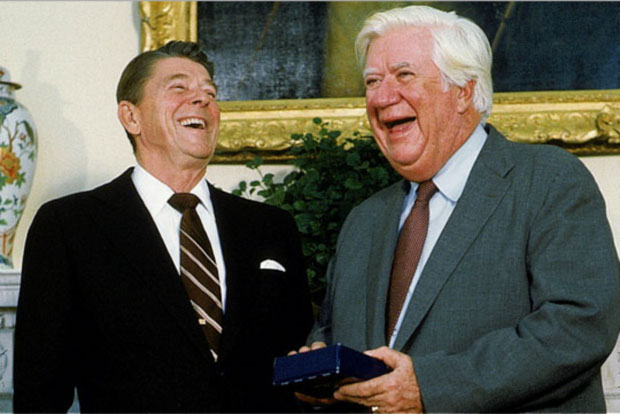 For quite some time, the effects of the Democrats' economic policies have differed little from those of the Republicans. Though the economy tends to do better under Democratic presidents, the fact that income inequality has increased at pretty much the same rate since 1978 whether Democrats or Republicans are running the government shows that both parties are mainly inclined towards helping the rich.

But while Democrats, formerly the party of the people, joined this neoliberal coalition by adopting the Republican Party's positions on trade, Wall Street, and (to an extent) entitlement programs, the main economic issue that the two parties have remained in disagreement on is taxes.

Prior to the 1990's, wherein Bill Clinton's tax policies involved raising rates on the wealthy, there was an era where tax cuts were a bipartisan issue. After the 1980 election, Democratic strategists decided to essentially adopt Ronald Reagan's position on the matter. In his 1984 DNC speech, Walter Mondale assessed this shift by saying that after losing, Democrats "began asking where our mistakes had been," and then talking about how their updated platform didn't include increased taxes. Throughout the Reagan years, Democrats lived up to this, with Reagan being able to pass his upper-income tax cuts while Democrats held the majority in the House throughout his entire presidency (Tip O'neill, the Democratic House Majority Leader during this time, is pictured above).

But despite the Democrats having then taken on a neoliberal slant regarding trade deals, Wall Street regulation, and other issues, the one way in which the Clintons shifted their party to the left had to do with taxes. Though the rich own both parties, since the 90's, they've largely been able to rely on Republicans, not Democrats, to grant them tax breaks.

Except it looks like Democrats are evolving on taxes again, and this time they're headed back in the direction of Reaganomics.

The first sign that the party is making a turnaround on this issue came in 2010, when the idea of letting George W. Bush's tax cuts expire was being negotiated. The 2003 cuts, whose unfairness towards the middle-class contributed to the rise in income inequality (and would not have passed had just three more Democratic senators opposed it), were now being extended by Barack Obama and most of the Democrats in the House and the Senate.

This represented a major ideological shift within the party. Democrats had regained control of the government in the 2006 and 2008 elections partly by promising to let the tax cuts expire, and now they were doing exactly the opposite. The excuses Democrats used for doing so-we can't raise taxes during a recession, raising taxes would hurt small businesses and the middle class-held no water, and the only conclusion one could have objectively come to was that the Democratic Party had moved to the right on economics since the Clinton years.

And though Obama has since proposed (to no avail) a tax increase on the one percent, his record on the issue has been very questionable. The unwillingness of him and other Democrats to pass tax reform during the two years that they dominated politics has left us with a highly unfair tax system that won't be changed for the foreseeable future. It was also a Democratic administration that passed the Panama-United States Trade Promotion Agreement in 2011, which famously led to opportunities for massive money laundering and tax evasion for many global elites (Obama then responded with a mainly symbolic tax reform bill after that fact was made public earlier this year).

What Democrats have done in recent years that most resembles their past of embracing upper-income tax cuts, though, has to do with just that. The tax proposals of Democrats, which have included lowering the estate tax, expanding the exemptions for the alternative minimum tax, and extending Bush's tax cuts to stock dividends and capital gains in addition to the other cuts of his, have, as Mother Jones writer Josh Harkinson assessed in 2012, had similar effects as the ones of Republicans:


The big debate in Washington right now centers around whether or not to "tax the rich." This week, Senate Democrats passed a plan to cut income taxes on the middle class while increasing them on families that make more than $250,000 a year. Next week, House Republicans will push through a bill to extend (the erstwhile "temporary") Bush-era tax cuts for the middle class and the rich. But scratch beneath the surface of these dueling tax plans, and it quickly becomes clear that the GOP isn't the only party in Congress that wants to help the rich get richer. As Ezra Klein notes at Wonkblog, the cumulative effect of Democratic tax proposals will most likely be a $17,000 tax cut for the top 1 percent of earners (compared to a $75,000 tax cut under the GOP plan).

Another way Democrats are working to reduce the tax burden on the wealthy is through lowering corporate taxes. In 2012, Obama proposed cutting the corporate tax rate. Though the bill also included ideas for cracking down on corporations that exploited tax exemptions, his desire to cut taxes on them was helpful for none other than the corporate executives it targeted. The main reasons Republicans shot down the bill, it seems, was because it didn't cut taxes as much as they would have preferred.

And for the foreseeable future, this newfound Democratic enthusiasm for reducing taxes on the economic elite will only get more significant. Though Obama's Trans-Pacific Partnership, which might hold similar implications for tax evasion to that of the Panama trade deal, doesn't look like it will pass before the end of his term, his successor will pursue it further. Hillary Clinton, who will be the next president barring something unforeseen, has very much failed the test of whether her actions show she's sincere in her promise to oppose the TPP, and when she flips again on the deal as one of her insiders expects, only a strong showing of public protest will stand in the way of its passage.

There are many additional signs that the second President Clinton's tax policies won't very much resemble those of the first. A plan proposed by Tony James, one of Clinton's Wall Street backers and a possible future financial advisor of hers, aims to raise taxes on the middle-class and funnel it to private equity and hedge fund firms. There's also a great deal of evidence that Clinton intends to grant corporations tax cuts, with Democratic insiders like Peter Orszag and Chuck Schumer openly talking about her succeeding where Obama failed in aiding the corporate monopoly of America's resources. Hillary and Bill Clinton have privately endorsed such a measure as well.

And with Republicans expected to keep the majority in both the House and the Senate-thanks in part, ironically, to the fact that Clinton is the nominee-achieving such neoliberal goals will be easy for her. In spite of the initial partisan disputes, I expect that President Hillary Clinton will be able to work very well with the Republicans in the House and the Senate in terms of fighting the more liberal Democrats in parliament so that they can get the policies where their views overlap on-which are numerous-enacted into law. There's also a possibility that with Republicans having the power to box Clinton in politically, she'll reverse her currently liberal stance on income taxes and sign a tax cut similar to that of Reagan or Bush.

By the end of Clinton's term, with her being the main representative of the Democratic Party, I believe the Democrats will for the most part have turned into an institution which supports the Reaganist view on taxes. Thus, with Democrats also supporting corporatist trade deals, aggressive foreign policy, Wall Street deregulation and bailouts, and money in politics, their transformation into the second party of the billionaire class will be virtually complete, with the only remaining differences between the two parties having to do with social issues and spending on social services. At that point, with the record income inequality that such actions have produced having reached a level that motivates the public to stage a populist revolt, hopefully Americans will largely abandon the Democratic and Republican parties and work towards the rise of an alternative.
Posted by Rainer Shea at 10:06 PM