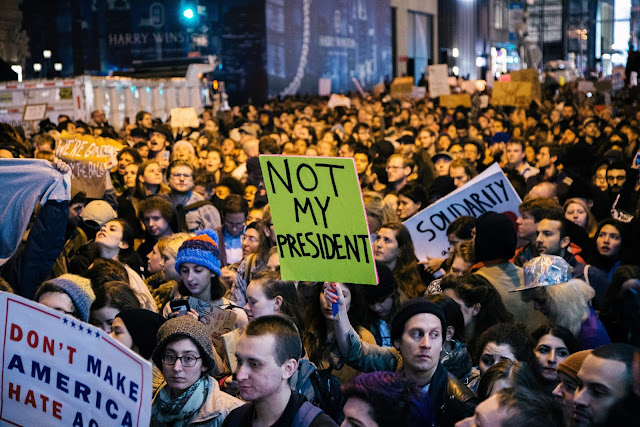 The final weeks of Barack Obama's term have sadly been defined by some of the worst crackdowns on civil liberties the United States has (so far) seen this decade. Last month, his administration introduced a law called H.R. 6393, which, if passed, would allow the government to counter-act websites that the state deems to be fake news outlets. And on Christmas Day, Obama signed the Countering Disinformation and Propaganda Act, which establishes a government agency with the purpose of suppressing such sites.

These measures are just the tail end of the saga of unjust actions that the U.S. government has taken throughout the last several decades, and indeed for the last several centuries. Genocide, slavery, economic exploitation, perpetual war, environmental destruction, the creation of a surveillance state, and countless other unjustifiable policies have been justified by the country's leaders to the public through fear, disinformation, and scapegoating, with the government's effort during the last few months to justify the laws mentioned above with a good old-fashioned Red baiting campaign being no exception.

The good news, though, is that I'm convinced this will be the last time the state can succeed with such propaganda efforts for quite a while.

The tactics I've mentioned all fall under one category of effort on the part of the state to gain public support for its oppressive actions: inverted totalitarianism. The methods that this term signifies, as Chris Hedges assesses, is applied to American society as follows: "Inverted totalitarianism is different from classical forms of totalitarianism. It does not find its expression in a demagogue or charismatic leader but in the faceless anonymity of the corporate state. Our inverted totalitarianism pays outward fealty to the facade of electoral politics, the Constitution, civil liberties, freedom of the press, the independence of the judiciary, and the iconography, traditions and language of American patriotism, but it has effectively seized all of the mechanisms of power to render the citizen impotent."

What's recently disrupted this order, though, is something somewhat counterintuitive: the (minority-decided) election of a leader whose political brand is invertedly totalitarian to the extreme. The means Donald Trump has used to gain support fits every part of the definition of inverted totalitarianism; by almost consistently misrepresenting the truth while making public statements, seeking to portray himself as a victim of biased media and governmental institutions, and inciting anger towards groups and individuals that he chooses to scapegoat, he has effectively created a cult of personality wherein his supporters (literally) pledge allegiance to him despite the encyclopedia of evidence that he is not someone worth following.

What's backfired about this approach, though, is that aside from his loyalists, it's caused the country to turn against him. According to some surveys, 70% of Americans view him unfavorably, and while just 54% view him as honest and trustworthy, a minuscule 29% said in September that they would be excited to see him as president, and 24% said they would be proud. Especially considering how this may be one of the higher points of his popularity since the favorability ratings of presidents tend to peak early in their terms, it's clear that the next president will not be welcomed by the vast majority of the population.

The result of this, I believe, will be an effort on the part of all save the members of Trump's ever-diminishing personality cult to overthrow him and the oppressive system he represents. I believe this will be the case because when this revolution inevitably materializes, it will in a lot of ways be led by those on both the liberal and conservative sides of the political spectrum. In a piece from earlier this month, I predicted Trump's presidency would provoke the rise of a possibly unprecedented progressive backlash against the new president and his agenda. It turns out, though, that a great deal of those on the right could join this effort, because liberals and conservatives in fact share many goals.

A survey from 2014 shows that the majority of Republicans, like most other Americans, want an end to the failed Drug War and do not think someone should be arrested for marijuana possession. The views of Republicans on taxes have radically shifted in recent years, with 53% of them supporting the idea of raising taxes on the wealthy. The same is the case for their beliefs about the environment, with 54% of Republicans acknowledging the existence of climate change. The government's mass surveillance programs are generally opposed by conservatives as well, with about as many Republicans as Democrats being opposed to the Patriot Act in its original form and 56% of them disapproving of the NSA's electronic communication surveillance. Most Republicans favor raising the minimum wage (though unfortunately only a quarter of them want it raised to $15). And 80% of them want Citizens United, and by extension the role of money in politics, ended.

In short, most Americans support policies which advance social, environmental, and economic justice, with conservatives in many ways being no exception. And with Donald Trump being viewed as hard to like by half of Republicans, I expect the anti-Trump wing of the Republican Party will join the rest of the country in resisting the efforts on the part of Trump and leaders like him to ignore climate change, drive up the wealth gap, and expand mass incarceration and with the surveillance state. And especially given how the current income disparity has made it so that the conditions are now very hospitable for such a movement, I also believe this revolt's success is most certainly assured.

The irony of this situation is that inverted totalitarianism's death was caused by inverted totalitarianism itself. Trump won because he played on the anger that so many are feeling towards traditional institutions and leaders, and now that he's president-elect, he, along with the political and economic establishment that he pretends to oppose, are about to lose their power.
Posted by Rainer Shea at 7:52 PM