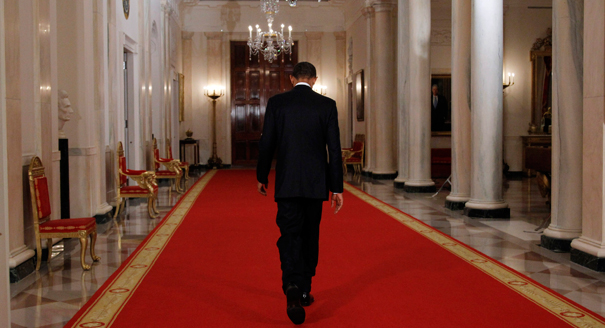 This year will be the last wherein Shaun King plans to remain a registered Democrat. He announced his decision to abandon ship this May, when it was becoming apparent that the Democratic primaries had been stacked against Bernie Sanders too much for him to go into the convention with the majority of delegates. The reasons he gave for doing so, though, were bigger than him simply being disappointed with the results of an election; "Right now, the Democratic Party, which I have called home my entire life," King wrote, "is deeply in love with money. Consequently, its leaders have supported and advanced all kinds of evil, big and small, in devotion to this love affair."

I'm not the only one who agrees with him. Prior to this year's movement among many other Sanders supporters to leave the party after what its leaders in both the top and the lower levels did to undermine democracy, Democratic membership has been in free fall since 2009, with their numbers having dropped by 6% since then and independent identification having soared. This is no doubt the consequence of the fact that, despite the overwhelming public opposition towards corporate power in the midst of record income inequality, Obama and the rest of the Democratic elite have very much failed the poor by passing Wall Street bailouts, anti-worker "free trade" deals, a profit-based health care plan, and even cuts to the social welfare system. King and the millions of others who have left the party in recent years are right to think that the Democrats do not represent the interests of the people.

But the Democratic Party's abandonment of its base, and its base's abandoning of it, has been going on for a lot longer than seven years.

Though Democratic membership dropped and rose many times prior to 2009, there's another, perhaps even more important, way of determining a party's success: how many state legislatures its members hold. And according to this Washington Post chart from last year, when examining the recent history of that factor, a striking decline for the Democrats is noticeable. 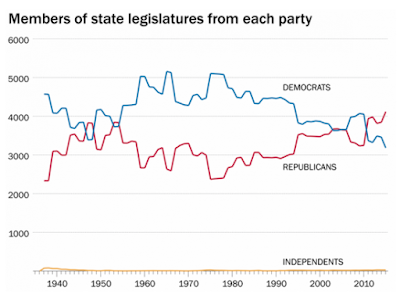 This decline can partly be attributed to the rightward shift that occurred in American politics and culture during the 1980's, but a factor that can't be ignored is how this was when Democrats began to shift to the right themselves.

As I talked about in my last article, after Carter lost, Democrats began to shift their economic agenda towards something more elitist, letting Reagan pass his upper-class tax cuts and business deregulations despite holding the majority in Congress throughout his entire presidency. And though these things evidently drove away parts of their leftist base, causing them to lose some of their former hold on the majority in state legislatures, this was only the beginning of their fall.

As you can see, Democrats saw a drop during the mid 90's that ended their half-century period of electoral dominance. After the party's drastic pivot to the right in the 1992 election, they lost the Senate and the House in 1994. Again, while that wasn't the only factor that caused the Democrats to lose, it very much played a role.

And then came the 2000 election, wherein Ralph Nader revealed to many the hypocrisy and corruption of the Democratic Party as it had come to be. This contributed to their loss of the House that year, and their loss of both the House and the Senate in 2004. While the public's overwhelming disgust with the Bush Administration during the end of his term bought Democrats four brief years of hope with their taking back the legislative majority in 2006 and 2008, their refusal to move away from the right as their base was moving increasingly to the left has since caused that trend to be reversed.

While the dirty tactics that Republicans have employed in recent years such as voter suppression and gerrymandering have played a large part in the Democrats' decline since 2008, the evidence is undeniable: Democrats have been sowing their own gradual doom for the past thirty-five years or so by shifting to the right and creating voter apathy among their base.

And as this phenomenon is expected to continue in this and future elections, which will make America more vulnerable to being taken over by the dark, neo-fascist brand of populism that the Republican Party is becoming a vessel for, the solution is clear: scrap the unreformable Democratic Party and work towards the rise of a third party for the left. The Democratic ship has been sinking for decades, and when it finally goes under in the next few years, we'll need to find another one, or drown.
Posted by Rainer Shea at 10:37 PM