Yes, It Is Time To Leave The Democratic Party 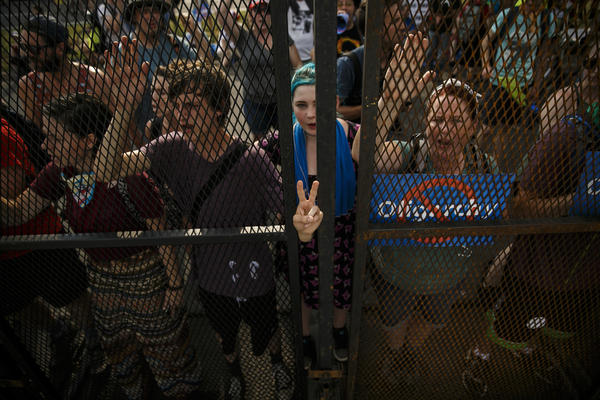 In a Salon article titled "Bernie's big lesson: Socialists should occupy the Democratic Party, not abandon it," optimistic person Daniel Denvir makes an argument for propping up the DNC that appears perfectly sound if you take it at face value. He dismisses Jill Stein's pleas for building another party for the 99%, saying that Bernie Sanders' unexpected success proves we can turn the Democrats into such an organization. He's convinced that with just a little more patience and work within the party, it can be reformed.

There are three good reasons that that approach is wrong.

1: The party can't be reformed by trying to beat it at its own game

Though Denvir acknowledges that the Democratic electoral system is rigged, he misrepresents just how corrupt it is. He argues, "Let’s not give Debbie Wasserman Schultz more credit than she’s due: the leaked DNC emails reflect sad griping more than coherent conspiracy. Though the debate schedule was stacked against Sanders, Clinton simply won more votes, which means the left, despite historic gains, still has more work to do to win majority support."

They did a lot more than manipulate the debate schedule.


Aside from the lack of media coverage making things harder for the Sanders campaign, as well as Hillary Clinton's inherent advantage in name recognition alone, there is no question that the DNC played a large role in his loss. And I'm not just talking about the voter suppression in Arizona, New York, Puerto Rico, as well as my home state California along with numerous others, or the untold millions of political independents who were excluded from voting in the primaries, or even the 84.3% of eligible voters who were either unable or discouraged from participating in the process.

Even after you discount all of the factors that make the results of the primary seem implausible from any reasonable standpoint, there is undeniable evidence that the Democratic leadership manipulated the vote.

The next paragraph may look like wishful thinking to someone who doesn't understand its context, so I recommend you first read this article and this article. But omitting the long explanation beforehand that's included within those links, I present to you a line from math genius Richard Charnin which summarizes all the reasons why Sanders rightfully won the primary:


It is important to note that Sanders’ exit poll share exceeded his
1) recorded share  in 24 of the 26 primaries. The probability is 1 in 190,000.
2) recorded share by greater than the margin of error in 11 primaries. The probability is 1 in 77 billion.
Is the exit poll shift to Clinton just pure luck? Or is something else going on?
TRUE VOTE MODEL BASE CASE ASSUMPTIONS
1.Sanders won the caucuses with 63.9%
2.  10% of voters  were disenfranchised  (voter rolls, provisional ballots, etc.) .
3. Sanders won 70% of uncounted votes
4. 15% of Sanders’ votes flipped to Clinton.

After adding that to the official primary results of Sanders having won 45.7%, of the votes, it shifts to him having actually won 52% of them. (Note: though it's not certain that Charnin's estimate of 70% of the manipulated votes are for Bernie Sanders is accurate, since the DNC singled out Sanders voters for disenfranchisement, it's clear that at least 50% of them are for Sanders, making his victory mathematically obvious.)

It may not be as dramatic or easy to prove as Bush v. Gore or other stolen elections, but the fact remains that the people have not been represented in this primary because of the DNC. Therefore, voters have every reason to believe that if they try to "reform the system" with their votes, as long as the process is controlled by party bosses who are beholden to the interests of their donors from above, it will simply not be possible.

This unfortunate truth can be likened to that picture on the top of Democratic National Convention protestors at the gates of the fence that was built around the Wells Fargo Center in July; they're trying to get the  superdelegates to nominate Bernie Sanders and change the party for the better, but they'll never be able to get inside both the misled minds of the Democratic elites, or the wall that's keeping them out.

Even so, people like Denvir might think, this doesn't mean the powers that currently run the party are immovable. Surely, even with such manipulations currently taking place, no institution is inherently resistant to change-just look at all of the Berniecrats that are succeeding this year.

There's a problem with that too.

Of course, it's not impossible in every case for genuine progressives to win elected positions within the Democratic Party. The primaries take place over several months and involve many different contests, making them easy for the DNC to influence in that since the results are determined through such a broad means, no one can find a simple way to dispute the results. The state and local-level contests that are fought for lesser positions than the presidency are almost always run fairly, because since they take place in one day, it would be a lot harder for the party to manipulate them without being inescapably caught doing so.

But there is another, larger obstacle to reforming the Democratic Party: no matter how many progressive Democrats hold positions other than the presidency, they will always be forced to support the more powerful forces in the party.

Though presidents and presidential nominees don't hold all of the power, they're key players in the DNC's game; first of all, no matter how progressive any politician is, as long as they're members of the Democratic Party, they will have to support its presidential  nominee, who, as this primary has made clear, will always be beholden to the corporate and banking interests. Second of all, even if genuine progressives take control over the other branches of government than the presidency, any actual progress will be prevented by the president's veto power. And third of all, as we've seen at this year's Democratic convention, the DNC has made it clear that they'll always find ways to keep progressives in their place during the presidential nominating process, and therefore in any other case where it will have the ability to do so.

"The establishment," says Denvir, "awash in corporate money and snarky emails, is neither omnipotent nor cunning. It is feckless." Though part of that may be true, as the Democrats are not exactly a tightly-run cabal ruled over by calculating masterminds, they've developed a nearly foolproof method for stopping change. And even with the best efforts from liberal activists, we won't truly see reform of it any time soon.

2: The party won't be reformed

That can't be the end of it, though; the Democratic Party is an organization, not a person, and it's not inherently incompatible with the influence of the people. Eventually, with enough determination, change can be achieved.

The reality is that it's simply too late for the Democratic Party. The combined electoral majority of young, far-left, and independent voters that it needs to survive have given up on it for good after what's happened this year, and if it has any chance of changing in a way that brings them back, because of them that will never happen. The corruption runs so deep that such a radical shift would take at least two election cycles at the very least, and  the historical trends from before the "Demexit" movement even started show that Democrats are on their way to becoming irrelevant, or at least severely weakened, well before then.

The Democratic Party is a ship that's sinking rapidly, and no amount of attempting to repair its damaged hull can save it from going under.

And as anyone who isn't completely beholden to it can see, that's a good thing.

3: We shouldn't try to reform the party

After considering those first two reasons, another fact becomes clear: the world can't afford to invest itself in the possibility of changing the Democratic Party. The climate is rapidly deteriorating, and the level of economic inequality and corporate control over politics has reached a formidable level. If the two-party system is allowed to continue, if any action is taken on these issues, it will happen sooner than later, and by then it will be too late. We need profound, almost immediate governmental reform if we are serious about solving our problems, and that cannot happen if we're tied down to an almost incurably corrupt and rigid political institution.


And what Denvir is most wrong about is that such reform is possible. Though he acknowledges that more radical organizations should be maintained outside of the DNC on at least local levels, his rationale ultimately falls into the old Democratic defense that a serious alternative shouldn't be considered, as doing so would be joining a minority group with no hope of winning. That may have been true in recent history, but much of the country has woken up to the possibility that third parties can win if they support them, and soon enough, an electoral tipping point will be reached.

I'm going to conclude this with a story from this year's Democratic convention. In her acceptance speech for the nomination, Hillary Clinton included a historical anecdote so appropriate for the moment that it had to have been mentioned because of it:


My friends, we've come to Philadelphia – the birthplace of our nation – because what happened in this city 240 years ago still has something to teach us today.
We all know the story.
But we usually focus on how it turned out - and not enough on how close that story came to never being written at all.
When representatives from 13 unruly colonies met just down the road from here, some wanted to stick with the King.
Some wanted to stick it to the king, and go their own way.
The revolution hung in the balance.
Then somehow they began listening to each other … compromising … finding common purpose.
And by the time they left Philadelphia, they had begun to see themselves as one nation.


This was most likely an attempt to assess the current situation of her own supporters, who wanted to stick with the king, and the Bernie Sanders supporters who wanted to stick it to the king. It's a clever analogy, but her saying it is ironic, because when those revolutionaries were faced with the choice between remaining with the oppressive establishment and breaking from it, we all know what they did.
Posted by Rainer Shea at 5:19 PM